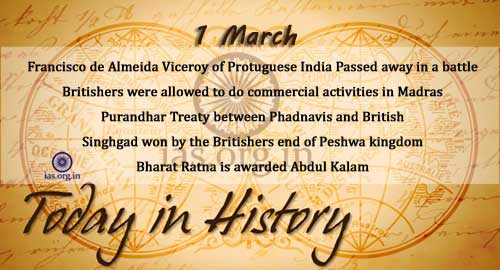 Francisco de Almeida, Viceroy of Protuguese India, passed away in a battle.

Britishers were allowed to do commercial activities in Madras.

Purandhar Treaty was singed between Nana Phadnavis and British Army.

Singhgad won by the Britishers after the end of Peshwa kingdom.

The Dalai Lama is welcomed in Darjeeling.

The first AN-12B arrived in India. This was added in the force because of the increasing frequency of clashes with Chinese forces on the Sino-lndian Himalayan border and the need that these revealed for yet further increase in airlift capability, together with a requirement for medium helicopters suitable for high-altitude operation, orders were placed in the Soviet Union for eight Antonov An- 12B and 24IL-yushin 11- 14 transport aircraft plus 10 Mi-4 helicopters.

25 Sqn, AF was formed with 04XAN-12 aircraft acquired from the erstwhile USSR. This was to supply lines to the Army in the Northern Sector encompassing J&K and Ladakh regions.

Central Translation Bureau was setup as a subordinate office under the Ministry of Home Affairs. The Bureau undertakes translation work of manuals, codes, forms and other non-statutory procedural literature of various ministries, departments, offices of the Central Government and Undertakings, Banks etc.

Justice Y. Y. Chandrachud is sworn in as the Chief Justice of India.

Jairamdas Doulatram, great national leader, freedom fighter and journalist, passed away at Delhi. He played a vital role to recognised Sindhi as one of the national laguages of India.

Supreme Court frees CBI from the control of PM Rao and directs that CBI would take no instruction or permission from or report to any authority personally interested in or likely to be affected by the investigation into the hawala case.