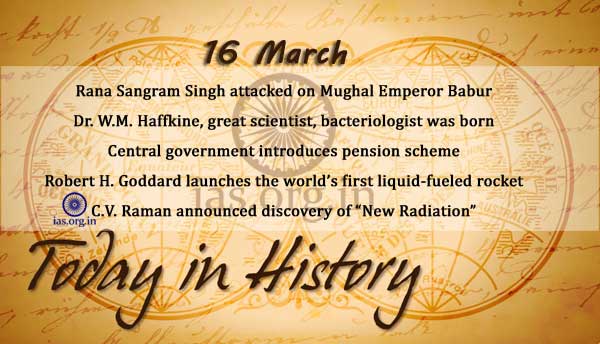 The first man to give hope to dreams of space travel is American Robert H. Goddard, who successfully launches the world’s first liquid-fueled rocket at Auburn, Massachusetts. The rocket traveled for 2.5 seconds at a speed of about 60 mph, reaching an altitude of 41 feet and landing 184 feet away. The rocket was 10 feet tall, constructed out of thin pipes, and was fueled by liquid oxygen and gasoline.

C.V. Raman announced his discovery of ”new radiation” to an assembly of scientists at Bangalore.

Subroto Mukherjee became the first Indian Officer to command a squadron when he took over No.1.

Satyajit Ray, veteran film producer and director, was presented the honorary Oscar by a three-member Oscar committee at a Calcutta nursing home.

Sonia Gandhi is elected chairperson of the Congress(I) Parliamentary Party.

The Shiromani Akali Dal creates a record by unanimously electing Bibi Jagir Kaur Begowal as the first woman president of the SGPC.