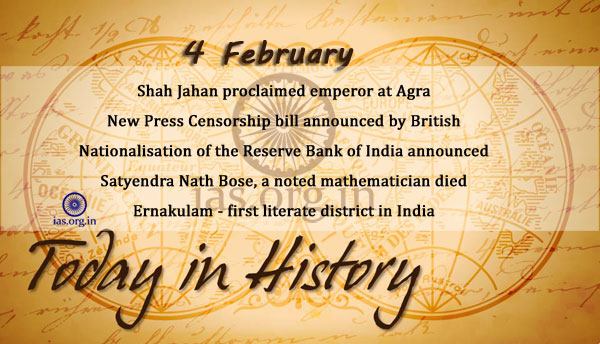 Shah Jahan was enthroned and proclaimed emperor at Agra.

Shahabuddin Muhammad Shah Jahan (15 January 1592 – 31 January 1666) was the fifth Mughal Emperor of India from 1628 to 1658. Born Prince Khurram, he was the son of Emperor Jahangir and his Hindu Rajput wife, Taj Bibi Bilqis Makani.

He was chosen as successor to the throne after the death of his father in 1627. He was considered one of the greatest Mughals of the Timur family. Like his grandfather, Akbar, he was eager to expand his vast empire. In 1658, he fell ill and was confined by his son and successor Aurangzeb in Agra Fort until his death in 1666.

Lord Clive remained unsuccessful after sending two ambassadors to make treaty with Siraj -Ud -Daula, while he was marching towards Calcutta.

Finance Minister announces nationalisation of the Reserve Bank of India (RBI) after Sept 30, 1948.

Satyendra Nath Bose, a noted mathematician, professor and physicist, passed away at Calcutta. He contributed greatly to statictical mechanics, the electromagnetic properties of ionosphere, the theories of X-ray crystallography and thermoluminescence, and unified field theory. Bose instituted “Planck’s Law and the Hypothesis of Light Quana”. He died on this day.

Ernakulam was declared the first totally literate district in India.

India elected to the executive boards of UNDP, UN Population Fund and UNICEF.