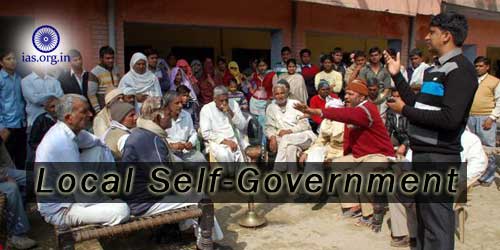 The Chief Local Government Institutions, that establish a mechanism of local self government in the urban areas (towns, cities and metropolises), include Nagar Panchayats, Municipal Committees and the Municipal Corporations.

Nagar Panchayat, as the constituent of the local self-government, is the smallest unit of the urban population. Areas in the process of changing from rural to urban centres are known as towns; generally a town is bigger than a village but smaller than a city. A Nagar Panchayat’s members are elected by the voters, at least 18 years of age, of the region. Members must be at least 21 years of age.

Main Functions of the Nagar Panchayats

Sources of Income of the Nagar Panchayat

The elected members of the Municipal Committee elect a President and a Vice-President who presides over the meeting of the Committee and with the assistance of the executive officers like Secretary, the Health Officer, the Municipal Engineer carries out the functions of the committee.

In a Corporation or Municipality seats for the Scheduled Castes and Tribes are reserved in the ratio of their population to the total population of the town/city. 1/3rd of its members must be women of these tribes and castes.

Must Read: The Panchayati Raj

In very big cities (Metropolises) like Delhi, Kolkata, Mumbai, Chennai, Ahmadabad, Kanpur, Lucknow, Patna, etc. millions of people live over an area covering miles together. To provide these millions of people transport, pure drinking water, regular supply of electricity, schools and colleges, hospitals and other essential amenities is the duty and responsibility of the local self-government which in this case is the Municipal Corporation.

The elected members whose numbers vary from Corporation to Corporation, of the Corporation are councilors. These Councillors, in turn may, elect Aldermen who are known for their experience and knowledge. All these men constitute the Municipal Corporation.

The Councillors elect a Mayor, who is also called Mahapaur, and a Deputy Mayor from among themselves. The Mayor presides over the meeting of the Corporation and with the assistance of the officials of the Corporation looks after its work.

The Officers of the Corporation include, first of all, a Commissioner who is the highest official and is usually an IAS; he or she is appointed by the State Government. He acts as a general manager and advisor of the Corporation. He functions like a chain between the people and the Councillors.

Apart from the Commissioner, that is the Health Officer who is responsible for looking after the hospital and the dispensaries of the Corporation; the Chief Engineer who directs and supervises the building construction and repairs of the roads and streets, bridge, drainages etc.; then there are Education officers, the Executive Officers and the Octroi Inspectors, etc.

Functions of Corporation and Municipality

The functions of these two components of (Urban) Local Self-Government are very much similar; if there is any difference, it is only in the extent and scope than in their content. The functions of these bodies of the local self-government have been broadly separated into two classes: Compulsory Functions and Optional Functions.

Compulsory Functions: To take care of public health and sanitation is the first compulsory function of local self-government. It adopts both preventive and curative measures for the good health of the people.

Curative measure(s): Setting up of hospitals and dispensaries under qualified doctors in different localities;

One of the important function of the local self- government, that is Municipal Corporation, is to provide good roads and streets in its area and maintain them in good condition.

Education is a very important area that comes within the function of the local Self-Government because education, in itself, alone can prepare good citizens. For the efficiency in education at the grassroots level, local bodies set-up Primary Schools; mentionable here the fact is that the Primary Education in our country is both free and compulsory.

One of the other important function of the local self-government, that is the Municipal Corporation, is to arrange for public safety against dilapidated buildings and fire. For this the Corporation maintains fire engines and a trained staff to save life and property of the people. Similarly, it the duty of the Municipal Corporation, the local self-government, to grant sanction for setting up cinema houses, theatres, marriage places and petrol pumps. The Corporation and the Municipalities keep an eye on these places to ensure public safety.

Optional or voluntary function of the local self-government which it funds allows, it may perform:

Sources of income of these bodies of the local self-government included: