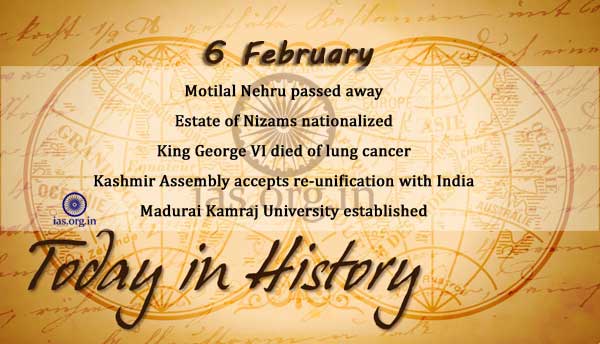 India to nationalize the estate of Nizam, the world’s richest man, from Hyderabad.

On this day in 1952, after a long illness, King George VI of Great Britain and Northern Ireland dies in his sleep at the royal estate at Sandringham. Princess Elizabeth, the oldest of the king’s two daughters and next in line to succeed him, was in Kenya at the time of her father’s death; she was crowned Queen Elizabeth II on June 2, 1953, at age 27.

Congress, PSP, CP and Jansangh recognised as All India parties by the Election Commission.

Ann Chandy was appointed the first Woman judge of Kerala High Court. In 1937, she became the ‘munsif’.