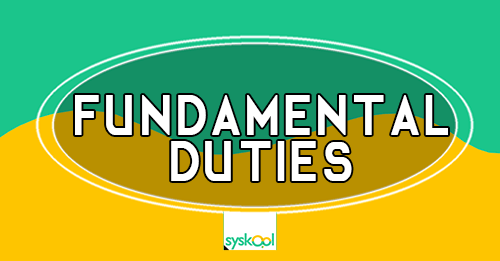 A citizen among other things, to abide by the Constitution, to cherish and follow noble ideals which inspired our national struggle for freedom, to defend the country and render national service when called upon to do so and to promote harmony and spirit of common brotherhood amongst all people of India transcending religious, linguistic and regional or sectional diversities.

The Fundamental Duties noted in the constitution are as follows

It shall be the duty of every citizen of India —

The Supreme Court has used the Fundamental Duties to uphold the Constitutional validity of statutes which seeks to promote the objects laid out in the Fundamental Duties. These Duties have also been held to be obligatory for all citizens, subject to the State enforcing the same by means of a valid law. The Supreme Court has also issued directions to the State in this regard, with a view towards making the provisions effective and enabling a citizens to properly perform their duties.