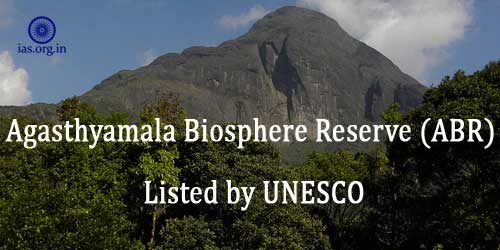 These 20 new sites were finalised and annexed during a two day meeting of the International co-ordinates Council on 19 March,  2016 in Lima, capital of Peru. These new inclusions have brought the total number of Biosphere Reserves to 669 sites in 120 countries and the list includes 16 transboundary sites too.

The Agasthyamala Biosphere Reserve (ABR) set up in 2001, is located and spread across the two states of Kerala and Tamil Nadu (in the Western Ghats, in South India). It is a unique genetic reservoir of cultivated plants especially pepper, jamun, cardamom, nutmeg and plantain.

As Agasthyamala Biosphere Reserve consists of three wildlife sanctuaries – Shendurney, Peppara, Neyyar Kalakd Mundanthurai Tiger Reserve, it has peaks reaching 1,868 metres above sea level, and consists mostly of tropical forests. ABR is a home to 2,254 species of higher plants out of that about 400 are local.

Biosphere Reserves (in India) shield larger areas of natural habitat and most of the time includes one or more National Parks or/and preserves as well as buffer zones that are open to economic uses.

In India there are 18 Biosphere Reserves; out of which Nilgiris, Nanda Devi, Nkre, Gulf of Manar, Sundarban, and Great Nicobar had been listed earlier in the network.

Each year, under the UNESCO’S Man and the Biosphere (MAB), new reserves are designated by the International coordinating council of UNESCO. The principal function of MAB is to bring together elected representatives of 34 UNESCO member states.

Based in Paris, France, UNESCO has over 50 field offices located around the World.

In 1942, when the governments of several European countries, during the second world War, assembled in the United Kingdom for the Conference of Allied Ministers of Education (CAME), the development of UNESCO was initiated.

It was during this conference that the leaders from the participant countries nulled over the idea to develop ways to reconstruct education across the world once the World War II was over.

The Conference ended with a promise to hold a future conference in London from 1 to 16, 1945 for the formation of an educational and cultural education.

In 1945, Shortly after the United Nations came into existence, the the delegates of the 44 participant countries of the Conference finalised to set up an organization in order to encourage a culture of peace, establish an intellectual and moral solidarity of mankind” and prevent another World War.

On 16 November 1945, when the conference concluded, UNESCO with the Constitution of UNESCO was founded by the 37 of the participant countries.

On November 4, 1946 the Constitution of UNESCO came into force after the ratification. And from November 19 to December 10, 1946 the first official General Conference of UNESCO was held in Paris; it was attended by representatives of 30 countries.

The number of participant members of UNESCO has grown to 195 : it establishes the growing significance of UNESCO across the world. There are 193 members of the United Nations but the Palestine and the Cook islands are also member of UNESCO.

In order to secure it goals of promoting education, social justice and global peace and cooperation, UNESCO has five distinct themes / fields of action:

Apart from these five themes there are special fields of action that require multidisciplinary approach, since special themes; some of these fields consist of Gender Equality, Languages, Climate Change and Education for Sustainable Development.

One of the most famous special themes of UNESCO is its World Heritage Center (WHC) that recognizes cultural, natural and mixed sites to be protected all over the world in an attempt to encourage the maintenance of cultural, historic and / or natural heritage in those places for other to see. The most famous sites of WHC include Pyramids of Giza, Australia,s Great Barrier Reef and Peru’s Machu Picchu.