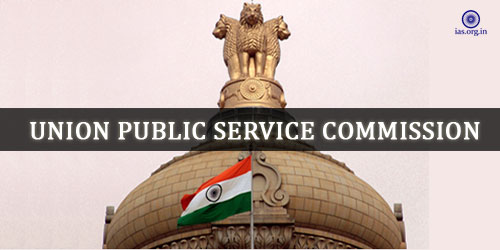 Articles 315 to 323 of the constitution of India of its part 14 deal elaborately with the provisions about the composition, appointment and removal of the member along with the functions, powers and independence of the Union Public Service Commission (UPSC). It Functions as the central recruiting agency in India. As it has been created directly by the constitution itself, it is considered as an independent constitutional body.

The Union Public Service Commission consists of a chairman and other members who are appointed by the President of India. The Constitution has not specified the strength of the commission. Its composition has been left to the discretion of the President to determine.

The UPSC usually consists of 9 to 11 members including its chairman. It has been provided in the constitution that ‘one- half of the members of the commission should be such persons who have held office for at least ten years under either the Government of India or under the Government of the state’ (Clause one Article 316). It is up to the president to determine the conditions of service of the members of the commission.

According to Clause 1A of Article 316 of the constitution, ‘if the office of the chairman of the commission becomes vacant or if any such chairman is by reasons of absence or for any other reason unable to perform the duties of his office,…. those duties shall be performed by such one of the other members of the commission as the President may appoint for the purpose.’

According to clause 2 or the article 316, the Chairman and members can hold office for a term of six years or until they attain the age of 65 tears, whichever is earlier. However, the Chairman and the members can quit their offices at any time by addressing their resignation to the President.

According to clause 1 of Article 317, the Chairman and any other member of the commission can be removed from his office by the order of the President on the ground of misbehavior. But the President, in this case, at first has to refer the matter to the Supreme Court.

According to clause 3 Article 317, the president can also order the removal of the Chairman or any other member of the commission from his office under the following conditions:

(a) If he is adjudged an insolvent (that is, ‘has become bankrupt’)

(b) If he engages, during his term of office, in any paid employment outside the duties of his office, or

(c) If he ‘is, in the opinion of the president, unfit to continue in office by reason of infirmity of mind or body.’

Defining the term ‘misbehaviour’ the constitution states that is slapped on the face by another, it is a case of misbehavior under Article 317 (1) and renders the latter member liable to be removal.

To safeguard and ensure the independent and impartial functioning of the commission, the constitution has made following provisions:

(a) The Chairman or any other members of the commission can be removed by the President only in the manner Prescribed in the constitution. Therefore, it can be said that they enjoy the security of tenure.

(b) Although the President determines the conditions of service of the Chairman or a member, these conditions cannot be varied to his disadvantage after his appointment (Article 318).

(c) The entire expenses including allowance, salaries and pensions of the Chairman and members of the commission are not subject to the vote of Parliament. They are charged on the Consolidated Fund of India.

(f) The Chairman or a member of the commission, after completing his first term, becomes ineligible for reappointment to that office.

According to the Article 320 of the constitution the commission performs the following functions:

(b) It is also the duty of the commission (If requested by two or more states to do so) to help the state in framing  and operating schemes of joint recruitment for any service for which candidates possessing special qualifications are required.

(c) The commission is consulted on the following matters:

(1) All matters relating to methods of recruitment of civil services and for civil posts.

(2) The principles to be followed in making appointments to civil services and posts and in making promotions and transfers from one service to another and on the suitability of candidates for such appointments, promotions or transfers.

(3) All disciplinary matters affecting a person serving under the government of India in a civil capacity including memorials or positions relating to such matter. These consist of:

(The distinction between ‘Removal’ and ‘Dismissal’ is that a dismissed candidate disqualifies for the future employment under the Government whereas the removed candidate does not disqualify for the same.)

(4) Any claim for compensation of legal expenses incurred by a civil servant in defending legal proceedings instituted against him in respect of the act done in the execution of his official duties.

(5) Any claim for the award of a pension in respect of injuries sustained by a person while serving under the Government of India and question as to the amount of any such award.

It is the duty of the Union Public service Commission to advise on any matter referred to them by the President. All regulations made and is to be subjected to such modifications whether by way of repeal or amendment as both Houses of Parliament may make during the session in which they are so laid.

In one of its important decision the Supreme Court in 1992, has held ‘If before the selection is held, the Government withdraws its requisition from the Public Service Commission, neither the candidate nor the UPSC itself can insist on continuing the process of selection.

The constitution describes that the President, in respect to the All-India Services and Central Services and posts may make regulations specifying the matters, in which it shall not be necessary for the UPSC to be consulted.

Must Read: The Goods and Services Tax (GST)

The matters on which the Commission (UPSC) is not consulted are:

(b) Considering the claims of scheduled castes and scheduled tribes in making appointments to services and posts.

(c) On the selection for Chairmanship or membership of commissions or tribunals, posts of the highest diplomatic nature and a bulk of group C and group d services.

(d) On the selection for temporary or officiating appointment to a post if the appointed person is not likely to held the post for more than a year.

Article 323 or the Constitution, that deals with reports of the Commission states that ‘It shall be the duty of the Union Commission to present annually to the President a report.’ Then it is the duty of the President to place the report before both the Houses of Parliament, along with a memorandum ‘explaining the cases where the advice of the Commission was not accepted and reasons for such non-acceptance. It can be ascertained lastly that the role of the Commission is not only limited, but also recommendations made by it are not mandatory but are only of advisory nature, and, therefore, not binding on the Government. The Government has final authority to accept or reject that advice. The Government can also make rules which regulate the scope of the advisory functions of the Commission. Such rules are named as the UPSC (Exemption from consultation) Regulation.

The emanation of Central Vigilance Commission (CVC) in 1964 influenced the role of the Commission in disciplinary matters. Because the Government consults both agencies while taking disciplinary action against a civil servant. However, the Commission, as an independent constitutional body, has an edge over the CVC. CVC was created by an executive resolution of the Government and conferred a statutory status in October 2003.