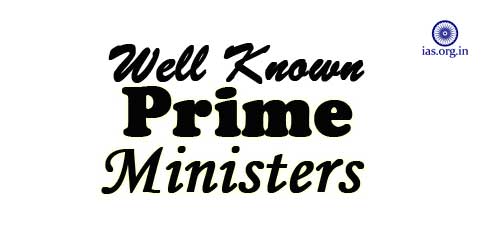 List of 10 Well Known Prime Ministers of India. All you need to know about them, their tenure, achievements and many more. Starting from Nehru to  Modi.

Jawaharlal Nehru, the First Prime Minister of  India, remained in the office for 17 years from 15th August 1947 to 27th May 1964. He played a significant role in shaping modern India by communicating modern values and thinking. He advocated for a society based on the model of scientific development. He introduced the Planning system and went for the industrial revolution in our country.

He was the Second Prime Minister of India, from 9th June 1964 to 11th January 1966. He gave the popular slogan “Jai Jawan Jai Kisan”and promoted “White Revolution” to increase the production of milk in India. He did a lot of work for the upliftment of Dalits. He died on 11th January 1966 at Tashkent in USSR.

Mrs. Indira Gandhi was the Third and the first women Prime Minister of India. Her courage and boldness made India won over Pakistan in 1971. She made  significant contributions in improving international relations with neighboring countries. By imposing emergency 1975 she lost her popularity. She was shot dead on 31st October 1984,by her own Security Guards in her official residence.

He was the Fourth Prime Minister of India, from 24th March 1977 to 28th July 1979. He was the first Non-Congress Prime Ministers of India, who headed the Janta Party Government by defeating Indira Gandhi. His greatest achievement was that he restored normal relations between India and Pakistan.

He was the Sixth Prime Minister of India who remained in the office from,31st  October 1984 to 1st December 1989. He played a major role in bringing computers to India. He tried to act as a peace-maker between Sri Lanka government and LTTE as a consequence he had to lose his life on May 21, 1991.

He was the Seventh Prime Minister of India, from 2nd December 1989 to 10th November 1990. He brought the Mandal Commission in force and through this act benefited crores of disadvantaged OBCs.

As the Ninth Prime Minister of India, he remained in the office from 21st June 1991 to 16th May 1996.He brought major economic reforms by liberating the Indian Economy through dismantling the License Raj.   He was also known as Chanakya. During his tenure, Jammu and Kashmir were torn apart by terrorist activity. He introduced the Terrorist and Disruptive Activities (Prevention) Act (TADA).

He became the Prime Minister of India for three times( from 16th May 1996-1st June 1996; from 19th March 1998-13th October; and from 13th October 1998-22nd May 2004).It was during his tenure that India successfully  conducted nuclear tests at Pokhran and renewed hopes for peace between India and Pakistan by initiating the New Delhi-Lahore bus services.

In his first phase, he gave impetus to the Indian economy and in his second phase somehow he lost his way. During his term, the Congress’ flagship programme MGNREGA was launched.

He assumed office on May 26, 2014. In The present Prime Minister is showing sign of a good administrator and giving strength to the Foreign Policy of our country.