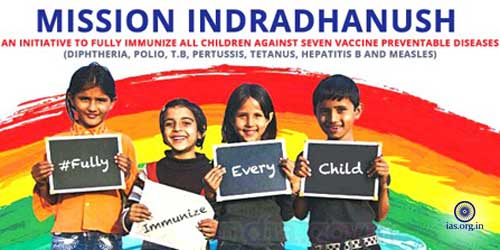 On 25th December, 2014 the Ministry of Health and Family Welfare (MoHFW) launched Mission Indradhanush with the objective to ensure that all children under the age of two years as well as pregnant women are completely immunized with seven vaccine – preventable –diseases. The Mission Indradhanush depicts seven colours of rainbow to target these seven diseases that can be prevented by administering vaccine to children and pregnant women. These diseases are:

Not only this, vaccines for Japanese Encephalitis (JE) and Haemophilus Influenza type B (HIB) are also being catered in some selected States.

Immunization is a process through which a child is made resistant to an infectious disease by the administration of a vaccine. Immunization assists in protecting the child from life threatening diseases. It also assists in reducing the spread of disease to others.

Vaccines, administered during the process of immunization work by preparing the child’s body to fight illness by prompting its body to produce antibodies –the disease fighting particles. It enhances the immune system of the child.

A child can be immunized by ANM/staff nurse/ Doctor, who remain present in nearby Government health centre or outreach session site. The immunization services are catered by the private health clinics and private doctors too.

Under the Universal Immunization Programme (UIP), vaccines are administered free of cost in government health centre and at outreach site. There are no side effects from immunization for most of the children. However, some children may feel mild pain or suffer from swelling or redness at the injection site that disappears within a few days.

Although serious side effects are rare and vaccines are continuously monitored for safety, side effects cannot be ruled out completely as is the case with any medicine. According to National Immunization Schedule children can get the vaccine at 6, 10 and 14 week and then at 9 months after their birth. The booster doses are administered at 16-24 months and then at 5 years of age.

Goal and Rationale of Mission Indradhanush

The first phase of Mission Indradhanush

The first phase of the Mission Indradhanush comprised four rounds. The first round commenced on 7th April 2015 and continued for more than a week. Further second, third and fourth rounds were held in the months of May, June and July respectively for more than a week from 7 of each month. The Government claimed that the first phase of the mission had been very successful.

Achievements of the First Phase of Mission Indradhanush

During the four rounds of the Mission, total 9.4 lakh sessions were organized in which about 20 lakh children were fully vaccinated and 2 crore vaccines were administered. More than 20 lakh pregnant women were administered Tetanus Toxoid vaccine. In order to protect the children against diarrhea more than 57 lakh zinc tablets and 16 lakh ORS packets were freely distributed to them.

On 7th October, 2015 the first round of the 2nd phase of the Mission Indradhanush started. The aim of the second phase has been to attain full immunization in 352 districts that consists 279 mid priority districts, 33 districts from North east States and 40 districts from phase one where large number of missed out children were found.