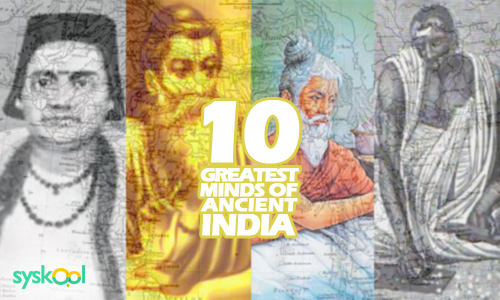 India has been a land of various great scientific studies and discoveries. Following list includes 10 ancient names from the endless list of greatest minds from the field of science, astronomy, and mathematics in India.

An ancient sage, he founded the sankhya, one of the six vedic philosophical school. The theory on evolution of the universe put forward by this school states that universe originated from eternal and invisible prakriti which comprises the gunas and tamas, rajas and sattva.

A skilled surgeon of ancient times, he is well known for his many notable contributions. Adapt in performing plastic surgery operations he mastered methods to remove kidney stones and cataracts, and identify and treat fractures. He was the first to advice caesarean operation. He developed the concept of asepsis and realised the importance of anaesthesia for operations. His work, Sushruta samhita, is of special value for its description of surgical techniques and about 101 instruments used in surgery.

You may also like: Top 10 Tiger Reserves in India

Also Kasyapa or Aulukya. He proponounded a theory for the evolution of universe which bears great similarity to the modern atomic theory. His Vaiseshika sutras explaining that the universe is made up of invisible anoos which exists in different combinations.

Charaka (between 3rd and 2nd century BC)

Indian Ayurvedic medicine owes its origin to Charaka who lived before 200-100 BC. He wrote the first book on medicine, the Charaka Samhita, dealing with the anatomy and functioning of the body and foetal development. He stated the three humours of the body to be vayu, pitta, and Kapha.

An astronomer and mathematician, he wrote the Aryabhattya, a treatise explaining new system and concept such as alphabetical order for numbers, trigonometric sine tables, the deriving of roots of numbers and eccentric-epicentric planetary motion. He calculated the accurate value of Pi to be 3.1416. He was the first Indian astronomer to suggest that earth was sphere and that it rotates on its axis. He advanced a theory for occurrence of eclipses.

An astronomer and mathematician born near Ujjain, who strongly believed in stellar and planetary influences upon man. He is famous for his Panka siddhantika, a book on astronomy displaying great knowledge and brilliance of mind. It dwells on Indian as well as Greek, Roman and Egyptian astronomical thoughts providing many calculations and even the Ptolemaic mathematical tables and charts.

You may also like: 10 Major Religions of the World – Must Know Facts

Noted ancient mathematician and astronomer, he introduced negative numbers. He used algebra for calculation in astronomy for the first time in India. According to Alberuni, he zero its status in mathematics. He is author of Brahmasphuta Siddhanta.

He was a leading exponent of the system of astronomy propounded by Aryabhatta I.

Another ancient Indian astronomer and mathematician who wrote Mahasiddhanta and Aryasiddhanta. He has discussed problem relating to geography, such as diurnal motion on lunar eclipses, on geometry and algebra.

Bhaskaracharya was the first mathematician to write a book on mathematics using decimal system of numbers. He introduced the plus and minus signs and conclude that dividing an integer by zero would be infinity. His books on subjects are Lilavathi and Bijaganita.