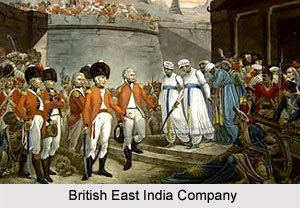 Vasco da Gama was the first Portuguese sailor who discovered as sea route to India via Cape of Good Hope. He arrived at the port of Calicut on May 27, 1498, paved the path for Alfonso de Albuquerque to carve out a Portuguese empire in India. In 1510 he captured Goa from Bijapur sultanate and also established trading centres in Bombay, Malabar coast, San Thome Near madras and Hooghly in Bengal.

Must Read: History of India in a nutshell
The English East India Company : It was chartered in December 1600 by Queen Elizabeth and granted the monopoly of eastern trade. Captain Hawkins paid a visit to the court of Jahangir in 1609 but failed to secure the trading rights. However, in 1613 Jahangir permitted the East India Company to establish a factory at Surat. Gradually the Company established its trading centres at Bombay, Calcutta and Madras.

The Dutch : They also came in the early seventeenth century but their influence soon vanished.

The French : They reached India in 1670 and established their centres near Madras and at Chandernagore on Hooghly. They also established their naval base in the islands of Bourbon and Mauritius in the Indian Ocean.

This is all about ADVENT OF EUROPEANS.
Also, Read:
How East India Company Established British Empire in India? Explained.
Overview of the History of India over a Timeline

Previous articleGandhian Thought of Sarvodaya
Next articleEmergence of Communists in India