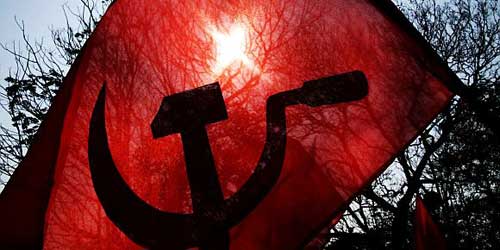 Various groups socialist and communists in India came into existence in the 1920s. The example of successful Russian revolution has aroused the interest of many people. They were dissatisfied with the outcome of the Non-cooperation movement and with the Gandhian political ideas and programs. On October 20, 1920, M. N. Roy (who had gone to Russia to attend the second Congress of Communists International and who, along with Lenin, helped evolved its policy toward the colonies), Abani Mukherjee and some Muhajirs (Khilafat enthusiasts who had joined the Hijarat and crossed over through Afghanistan into Soviet territory) like Mohammad Ali and Mohammad Shafiq, set up a communist party of India in Tashkent. Roy however, shifted to Berlin when his hopes of penetrating India through Afghanistan faded in 1921. From there, he started the fortnightly ‘Vanguard of Indian Independence’ and later published ‘India in Transition’ other Indian revolutionaries groups abroad were meanwhile turning towards Marxism most notably the old Berlin group headed by Virendranath Chattopadhyay, Bhupendranath Dutt, and Barkatullah. By mid-1920s an important section of Ghadar movement in exile has also turned communist under Ratan Singh, Santokh Singh, and Teja Singh Swatantra.
By the end of 1922, through Nalini Gupta and Shaukat Usmani, Roy established contacts with the emerging communist groups in India especially in Bombay (S. A. Dange), Calcutta (Muzaffar Ahmad), Madras (Singara Velu), and Lahore (Ghulam Hussain). In August 1922 Dange brought out the weekly Socialist from Bombay, the first ever communist journal to be published in India. In a letter to Dange on November 2, 1922, Roy outlined a plan for a dual organization – one legal and another illegal – a secret Communist nucleus working within a broad front Workers’ and Peasants’ Party.
The emergence of even a few tiny communist groups in India created a panic in the British Government, explained probably by the fear of another Bolshevik Revolution. In May 1924, Muzaffar Ahmad, S A Dange, Shaukat Usmani and Nalini Gupta were jailed in the Kanpur Bolshevik Conspiracy Case. However, the setback was only temporary. The Communist Party of India was founded in 1925. Of much greater significance was the setting up of a number of organizations between 1925 -27, embodying the idea of broad-front Workers’ and Peasants’ Party (WPP) to serve as a legal cover. The basic objective of the WPP was to work within the Congress to give it a more radical orientation, make it the ‘party of the people’, and independently organize workers and peasants in class organizations to first work towards the achievement of complete independence and ultimately socialism.
The Communists in India started developing real links with the working class. They were quite prominent in the Kharagpur railway workshop strikes of February and September 1927. Communists in India influence grew rapidly among the Bombay textile workers as well, from 1926 onwards, but there was little penetration as yet into the countryside. It may have been due to the sheer paucity of cadres which made dispersal into village very difficult in the 1920s.
Read Also:
Indian National Movement
National Movement of India: 1905 to 1920
US Amendment to Provide NATO Ally Status to India