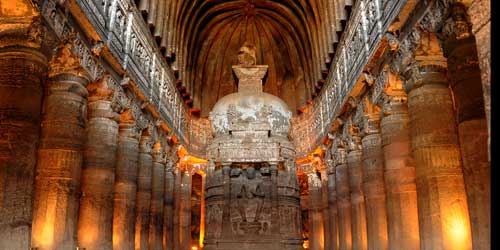 Ajanta cave is a name collectively given to a group of about 30 rock-cut Buddhist cave monuments. The caves are situated in Aurangabad district of Maharashtra. The Ajanta caves are given the status of UNESCO world heritage site since 1983 and are also protected under the care of Archaeological Survey of India. The Ajanta caves consist majorly of Buddhist religious art depicting Jataka tales and figures of Buddha. They include both paintings and sculpture which makes it a delightful tourist attraction to visit. The Ajanta caves are carved out from the side of a solid rock which is on the southern side of a U-shaped gorge made on the small river called Waghur. The caves form a horse-shoe shape. The degree of skill, originality, and creativity with which they are built is commendable.

The caves date back to about 2nd century BCE to 650 CE and were built into two phases that are  Satavahana phase and Vakataka phase. The first phase is also called Hinayana phase when buddha was followed symbolically and therefore the first phase lacks sculptures and stupas are found instead. The second phase is also called Mahayana phase when buddha was depicted as a human and in this phase, the images of buddha as sculpture or paintings are found in the Ajanta caves. 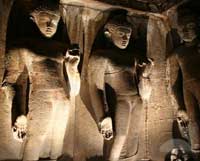 The caves are numbered from 1 to 30 but not in a chronological order. The Ajanta caves are numbered on the basis of their location, beginning with cave 1 on the northern side. Out of the 30 caves, 5 are chaityagrihas and the rest of them are viharas. Chaityagrihas are the places where monks used to worship and they used to reside inside the viharas. Cave 1 is the most famous cave when buddha is shown seated during the most remarkable incident of his life called ‘Dharmachakrapravartana’. The ceilings are adorned with geometric designs and motifs. A ceiling painting that depicts a running elephant surrounded by flowers was chosen as the official logo of Indian tourism department.

Ajanta caves are famous for its mural paintings which fall into two broad phases. The paintings at Ajanta are known to be the fountainhead of all the classic paintings of Asia. The earliest are found in the caves number 9 and 10 which are datable to second century B.C.  The second phase started around 5th-6th centuries A.D. and these exemplary paintings found in cave number 1,2,16 and 17 belong to vakataka period.  The main theme of the paintings is a depiction of the life stories of Buddha. The paintings are on a dry fresco that is they are painted on a dry plastered surface rather than on the wet plaster which is the conventional form of painting murals and that is why it makes them different from other mural paintings.

The paintings at Ajanta inspired many Indian painters to observe the ancient techniques and blending them with the modern style which helped them in developing their own distinct style. Nandlal Bose and Abanindranath Tagore are among the prominent ones.

Cultural  Heritage Sites of the world

Life in the Gupta Period