16. The arrival of British Empire in India goes back to the early part of the seventeenth century. On December 31, 1600, Queen Elizabeth granted a royal charter to a large body of merchants who formed a new trading Company under the name of ‘The Company of Merchants of London, Trading into the East-Indies’.

15. Between 1601 and 1613, merchants of this Company, later known as John Company or more specifically East India Company, made twelve voyages to India.

14. In 1609 Captain William Hawkins came to the court of Jahangir to seek permission to establish a presence British Empire in India but met with failure.

13. Sir Thomas Roe, who presented himself before the Mughal Emperor in 1617, was more successful in his mission. In 1619, Roe obtained Jahangir’s permission to build a British factory in Surat, and in 1639, this was followed by the founding of Fort St. George (Madras, now Chennai).

12. Despite some reverses, such as the Company’s utter humiliation at the hands of the Mughal Emperor Aurangzeb, with whom the Company went to war during 1688-91, the Company never really looked back.

Must Read: History of India in a Nutshell

11. In 1757, on account of the English-hatched political conspiracy leading to the so-called battle of Plassey, where Robert Clive practically affected a wholesale defection of the forces of the Nawab of Bengal, Siraj-ud-daula, the East India Company found itself transformed from an association of traders to rulers exercising political sovereignty over a largely unknown land and people.

10. Within a decade, the Company not only won the hard-fought battle of Buxar against the deposed Mir Qasim of Bengal and his allies in 1764 but also acquired the Diwani, or the right to collect revenues on behalf of the Mughal Emperor, in Bengal, Bihar, and Orissa in 1765.

Must Read: 18 Wars of Medieval India Battles that changed destiny of India

9. The consolidation of British Empire in India after the initial military victories fell to Warren Hastings, who did much to dispense with the fiction that the Mughal Emperor was still the sovereign to whom the Company was responsible.

8. Hastings also set about to make the British more acquainted with Indian history, culture, and social customs. His successors, though fired by the British imperialistic ambitions in India, also had to face the task of governance. 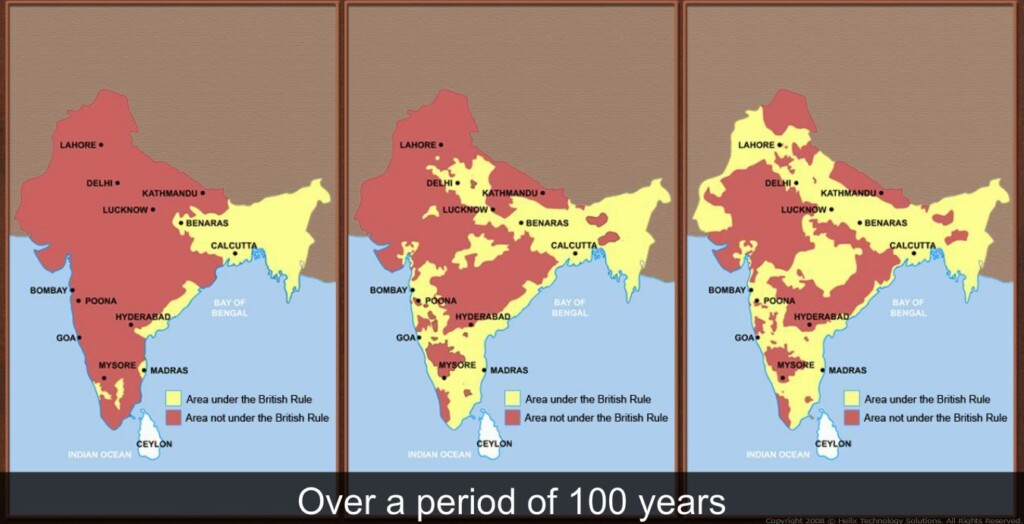 Foundation of British Empire in India

7. British rule was sought to be justified, in part, by the claims that the Indians required to be civilized, and the British rule would introduce in place of Oriental despotism and anarchy a reliable system of justice, the rule of law, and the notion of ‘fair play’.

6. Certain Indian social or religious practices that the British found to be detestable were outlawed, such as satiin 1829 by William Bentinck, and an ethic of ‘improvement’ was said to shape British social policies.

5. In the late 1840s and early 1850s Dalhousie brought more territories under native rulers were corrupt, inept, and notoriously indifferent about the welfare of their subjects, or that since the native ruler had failed to produce a biological male heir to the throne, the territory was bound to ‘lapse’ into British India upon the death of the ruler.

3. Shortly after the annexation of Awadh, British Empire in India witnessed the so-called ‘Sepoy Mutiny’ to recall the colonial terminology, or the ‘First War of National independence’ as per the nationalist perception, or the ‘Popular Upheaval’ of 1857 to use the politically more correct terminology.

2. This was by far the Greatest threat posed to the British since the beginnings of their acquisition of an empire in India in 1757, and within the space of a few weeks in May large chunks of territory in the Gangetic plains had been taken over by the rebels.

1. Atrocities were committed on both sides, and conventionally the rebellion is perceived as marking the moment when the British would always understand themselves as besieged by hostile natives, just as the Indians understood that they could not forever be held in submission.