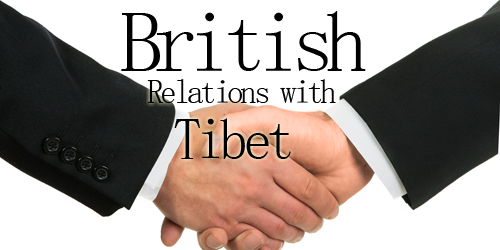 Tibet, though nominally under the suzerainty of china, was practically an independent theocracy under two great Lamas – the Dalai Lama of Lhasa and Tashi Lama of the famous monastery of Tashilhunpo near Shigatse. The political power was in the hands of the Dalai Lama or the Council that ruled during Lama’s minority.

It was in the year 1774 when the earliest attempts to set up form British relations with Tibet were made Bogla was dispatched by Warren Hastings on a mission to seek facilities for trade with Tibet.

However, in subsequent times the Tibetans started to disapprove British dealings with their country; in 1887 the Tibetans made an “inexplicable invasion” into Sikkim, the protected state, but were made to retreat the very next year by General Graham.

The provisions related to Sikkim-Tibet boundary and some commercial facilities, of the Anglo-Chinese Convention of 1890 was made more clear in 1893, but were coldly received by the Tibetans.

Must Read: Drain of Wealth – British Colonialism and Economic Impact

Lord Curzon and People of Tibet

Lord Curzon, when he arrived in India, found British relations with Tibet “at an absolute deadlock”. At this time the problem became more complicated because of two factors: on the one hand, the Dalai Lama with the help of his tutor, Dorjef, had overthrown the regency government and had been trying to establish himself as a story ruler; on the other hand, the Tibetans, in their eagerness to get rid of Chinese sovereignty were willing to welcome Russian friendship as a balance.

Dorjef, a Russian Buddhist, led Tibetan missions to Russia in 1898, 1900, and 1901, and rumours spread that he had virtually placed Tibet under the protection of Russia.

The rumours got so widespread that the Russian Government had to officially contradict this rumour and assure the British ambassador at St. Petersberg that the intention behind Dorjef missions was purely religious. However, this assurance of Russia could not slate off England’s suspicious about Russian intentions.

In 1903, Lord Curzon, in order to confront the situation, proposed to send a mission with an armed escort to Tibet; the Home Government, with some hesitation, sanctioned this mission proposed by Lord Curzon.

Under Colonel Younghusband, according to the plan, a mission started for Tibet; and after several intense encounters in the way with Tibetans, arrived at Lhasa on 3 August, 1904. After this, finally a convention was signed between Tibet and England. According to this treaty Tibetans accepted to open trade marts in Gyantse, Gartok and Yatung to play a guarantee of twenty-five lakhs and to permit English to possess the Chumbi valley for three years as a temporary pledge.

In June 1906 England and China concluded a convention in which England agreed neither to capture Tibet nor to intervene in the internal administration, in return Tibet promised English that they would not permit any other foreign power to have a say in the international administration or territorial integration of Tibet. Not only this, through this convention England was granted the power to establish telegraph lines linking the trading stations with India. The Chinese Government paid the compensation in three years and the English evacuated the Chumbic valley.

The only direct result of the Younghusband mission, the mission’s political results were not very important, was the introduction of three/trade marts and the formation of a British Trade Agent at Gyantse.

Both England and Russia, by the Anglo-Russia Convention of 1907, agreed to continue political relations with Tibet through China. This move on the part of England and Russia confirmed the suzerainty of China over Tibet which till then was a mere “Constitutional fiction” and was not explicitly reaffirmed. However, violating this convention, China in 1910 invaded Tibet and captured its whole territory. Dalai Lama took refuge in India

In order to lessen the tension caused by Tibet refusal to accept Chinese over lordship and to maintain peace along India’s northern boundary when a European war was looming on the horizon.

On 27 April ,1914 on the initiation of the British, a convention was called in Shimla in which three Governments, China, Tibet and English, took part under the terms of this tripartite convention, Tibet was separated into two zones and the suzerainty of China over these two zones was recognized.

However, China accepted to recognize the full autonomy of “Outer Tibet”; it surrounded the Indian boundary and included Lhasa, Shigatse and Chamdo, and to withdraw from all interference in its administration.

The Shimla Conference fixed the boundary between Tibet and North-eastern India from the east of Bhutan for a distance of 850 miles. This very frontier is known a Mc Mohan Line: It was Sir Henry Mc Mohan, the then secretary to the Government of India in Foreign Department, who signed the agreement on behalf of the British Government.

Also Read: Contributions of Britain to the World