My account
Get into your account.
LoginRegister
Plans
Home Learn History Establishment of Turkish Rule in North India 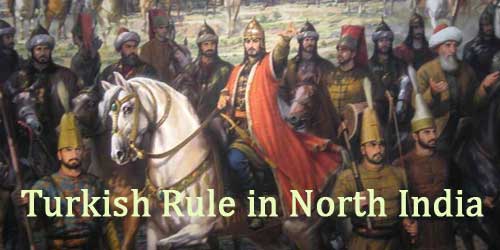 The onus of paving the way for the establishment of, if broadly assessed, the Muslim rule in India goes to Mahmud of Ghazni who was the first Turk military leader who invaded India, reaching deep pockets of northern India during the first half of the eleventh century. There were many factors which helped Mahmud of Ghur in successfully establishing Turkish rule in India.

Although Mahmud of Ghazni did not try to set up and consolidate his Empire in India, he decimated the military strength along with plundering the wealth of the regions wherever he could have reached.

So, it can be safely described that Mahmud of Ghazni prepared the stage by paving the way, for his next generation to establish a Turkish rule in northern India. This assumption can be considered apt in the light of this fact that after almost a gap of nearly one hundred and fifty years, Muhammad of Ghur began his military campaigns in India in AD 1175. There were many factors which helped Mahmud of Ghur in successfully establishing Turkish rule in India.

Political Factors leading to the establishment of Turkish Rule

Political situation prevailing at the time of Muhammad Ghur’s invasion was very fragile as India was divided into several states. It cannot be denied that many of them were powerful and extensive; however, their main weakness was that they were engaged in constant fighting against one another for power and prestige.

Due to this infighting the Indian States could not unite even to put up a fight against the common enemy which was posing a grave threat to the pride of their nation, culturally and religiously too.

In this context it is interesting, rather surprising, to note that even a series of foreign invasions could not produce a single leader with an ability to command Indians to unite and fight against the invaders.

Another important reason that contributed immensely to the political weakness of India was the deep rooted presence of feudalism. It was the feudal system of the Rajputs that promoted mutual conflicts and inflicted weakness in the military system of the States.

The social conditions of the time, that was ridden with caste system, practice of untouchability, gross social inequality and disparities, and unfair position of Indian women, also contributed heavily to the principal weakness of the Indian society.

At that time, as the caste system had become very rigid, the position of lower castes and women had nose-dived to the lowest strata, due to which many social evils had gripped the society as a whole.

Social evils such as female infanticide, child marriage devdasi system and the practice of Sati among higher castes had become common, while widow remarriages became an impossibility. Such a society, where the majority of people had become indifferent to the fate and politics of the country, was not capable of resisting any foreign invaders.

According to a prominent historian, the caste system weakened the Rajputs military because the responsibility of fighting was left to a particular section of the society, the Kshatriyas.

Deterioration of Religion as a factor for establishment of Turkish Rule

One of the major causes of defeat of Indians at the hands of Turk invaders was the deterioration in religions. According to Hinduism, the religion truly means duty that makes an individual useful for society and humanity; however, this spirit behind true religion was completely lost by the Indians that further resulted in the emergence of Tantric sects in which ritualism and image worship became popular. The prevailing condition demoralized the society in such a way that Hindus failed to confront the challenge posed  by foreign invaders by invoking the name of one religion, one culture and thus one country.

Although India was economically a rich country, the wealth was unevenly distributed as it was mostly concentrated either in temples or in royal families and trading class. This economic inequality played a very important part in inflating the weakness of Indian society as it had become inherent.

In the context of the matter that Indian fighting class lacked any higher purpose for fighting because they did not have a sense of having one country based on one religion and one culture, it is sufficient to quote Dr. A L Srivastava who summed up, “Mere physical strength and military weapons do not constitute the total equipment of an army. An inspiring ideology is as essential as military training and equipment”.