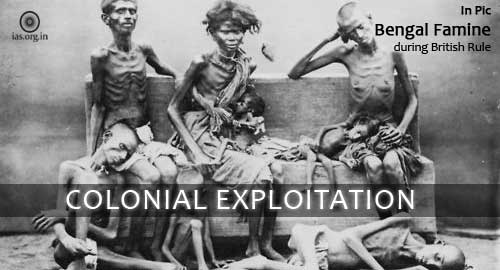 Colonial Exploitation of Indian economy, prior to the British Raj in India, was controlled and managed by village communities, which consisted of farmers and the functionaries. While the farmers were fully engaged in crop farming or Cattle farming, the functionaries provided essential services like that of blacksmiths, goldsmiths, Washer-men and shoe-makers.  Although agriculture was subsistence base (depended on rain), cultivators enjoyed the ownership rights.

There were no intermediaries (like Zamindars of the Colonial period) between the State and the farmers who had to pay a reasonable amount as land revenue directly to the king. Rural India’s life was a portrait of prosperity and stability. It was so Bernier, the famous French traveler, described Bengal in 17 century as “richer than Egypt” producing enough for self- consumption and exporting in abundance.

Industry was dominated by handicrafts. However, it had got a worldwide reputation of producing quality products like ‘Decca Muslin’. Export consisted of finished products, imports were largely of gold and silver.

Two factors, invented and implemented by the colonial masters of India, can be held responsible for the backwardness and stagnation of Indian agriculture during the British rule:

A unique system of land revenue was invented by the British Raj with an intention to draw maximum benefit from the Indian agriculture and in the process destroying it. This system was popularly termed as the Zamindari system of Land Revenue. This system functioned at three levels:

(a) The Zamindars were made, by their colonial masters, permanent owners of the soil,

(b) it was the responsibility of Zamindars to pay a fix amount to their colonial masters as land revenue, and

Eventually tillers became landless labourers and lost the interest in agriculture. However, they could not desert agriculture because there was no alternative means of subsistence for them.

The colonial masters forced the farmers to Shift cultivation from the conventional subsistence crops (like rice and wheat) to the commercial crops (Indigo in particular), because Indigo was in great demand in Britain in textile industry for dyeing and bleaching. It resulted in the farmers’ helplessness to be at a mercy of landlords because they became dependent on them for cash to buy food. Earlier farmers would grow grain for their family consumption but this forced shift in crop cultivation completely ruined them.

Under the British rule the Zamindars started to exploit agriculture as a source of un-earned income, the zamindar never invested, rather unfortunately, this income in agriculture. They wasted it on their luxurious lifestyle.

Industrial sector in India, prior to the British rule, implied predominance of handicrafts which were systematically destroyed by permitting tariff-free import of machine made goods from Britain. However, they placed a heavy duty on export of Indian handicraft products. As a consequence while the British products started pouring in the Indian markets, the handicraft products of India began to lose their domestic as well as foreign markets.

One important factor of the decaying of handicraft in India was the end of princely courts due to the hold of the British rule. Nawabs, rajas, princes and emperors formed the princely classes which used to patronise the handicrafts that enabled this industry in acquiring in international reputation. This ended with the end of this princely class.

Must Read: Phases of British Rule in India

Prior to the British rule India was a well known exporter of finished goods like fine cotton, silk, textiles, iron goods, wooden goods, ivory work and precious stones. India exported these items to different countries. However, since India was being ruled as a British Colony, exports and imports of the country came under monopoly control of the colonial masters. They directed more than 50 % of India’s international trade towards Great Britain. In the process India became net exporter of raw materials and primary products like raw silk, cotton, wool, jute, indigo, sugar, etc. And not only this, it became a net importer of finished goods produced by British industry. India’s imports consisted of cotton, silk and woolen clothes besides several kinds of capital goods produced in Britain. This is the most explicit example of the direct Colonial exploitation of Indian economy by the colonial masters.

Read Only: Drain of Wealth – British Colonialism and Economic Impact