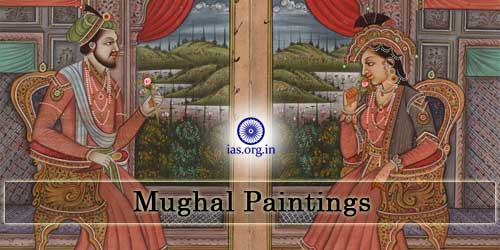 Although prior to the advent of the Turks painting in general was flourishing well, it practically vanished during Delhi Sultanate, however during the period of Mughal empire the Mughal Painting emerged as one of the most significant phases of Indian art.

It was due to the prohibition on painting imposed by Turk and the Afghan rulers that it ceased to exist in the larger part of India during the period of the Delhi Sultanate. However, this art was revived and brought to the stage of perfection by the Mughal emperors.

The Mughal School of painting, in fact, evolved as a consequence of fine blending of Persian and India painting; both of these schools of painting had made striking progress independently of each other. The credit goes to Babur and Humayun who came in contact with this Persian art and introduced it in India. After them, although Akbar did provide his protection to many foreign painters particularly those belonging to Persian, he, not being satisfied with that only, promoted Indian painter as well and in his service he employed them in a large number. After getting an opportunity to work together both Persian and Indian artists they not only learnt from one another but also influenced one another as well that resulted in the development of the Mughal Painting. And in the process of making itself free from foreign influence, the Mughal painting pursued its own independent course and ultimately was Indianized.

Mughal Painting from Babur to Akbar

Although Babur and Humayun did not approve the prohibition of Islam on the art of painting, during their reigns nothing of importance could be achieved in this field. However, with the advent of Akbar on the throne the scenario changed. After becoming the emperor, Akbar started to promote painters at his court and assisted in the development of this art. He set up a separate department of painting.

That Akbar was really interested in the development of this art form becomes crystal clear from his efforts he earnestly did to achieve his purpose: he invited well known painters from Persian and China, best talents of the country got employment at his court; he encouraged them by assigning works according to their individual taste and aptitude and catered them all facilities to make use of their capabilities. The encouragement and facilities arranged by Akbar helped numerous talented artists to develop and mature their art that resulted in thousands of paintings and the emergence of the school of painting that we call the Mughal Painting, or the Mughal School of painting.

At Akbar’s court there were at least one hundred good painters; although many of them were Persians, a large number of them were Hindus. Thus the credit of the origin of Mughal Painting goes to Akbar who paved the way for its development as well.

Must Read: The Gandhara Art

According to most of the eminent historians, it was during the reign of Jahangir that the Mughal Painting acquired the zenith of its rise; it is imperative, in this context, to mention here that Jahangir was not only interested in painting but was also a keen observer and judge of it. It is because he himself possessed knowledge of the art of painting, and not merely his interest and patronage that he provided to the painters, that caused the development of painting during Jahangir’s reign.

Jahangir, on the art of painting, writes in his biography Tuzuk-i-Jahangiri: “As regards myself, my liking for painting and my practice in judging it have arrived at such a point that when any work is brought before me, either of a deceased artists or of those of the present day, without the names being told to me, I can say at the spur of the moment that it is the work of such and such a man. And if there be a picture containing many portraits, and each face be the work of a different master, I can discover which face is the work of each of them. If any person has put in the eye and eyebrow of a face, I can perceive whose work the original face is, and who has painted the eye and the eyebrow.”

Although the above statement of Jahangir may be cast aside as piece of exaggeration, we would still have to accept the fact that the emperor was not merely interested in painting but was also a good judge of this art. He not only attracted many artists to his court but also got completed the works taken up by artists during the lifetime of Akbar, his father.

Mughal Painting during Shah Jahan’s reign and after

That Shah Jahan took more interest in architecture than painting is true, yet he did provide patronage to painting. However, the reduced number of painters at his court establishes the view that the art of painting certainly declined during his reign.

As far as the reign of Aurangzeb is concerned, he withdrew the royal patronage that was customarily given to the artists. Aurangzeb turned the artists out of his court and even ordered to destroy certain paintings because, according to him, the practice of this art was prohibited by Islam. Thus it becomes quite evident that the Mughal Painting, that took shape and flourished due to earnest efforts of Akbar, suffered during the reign of Aurangzeb.

In the history of Indian painting, Mughal Painting occupies a well deserved respectable place because it once grew to perfection. Under the influence of Mughal painting a large number of paintings of different types were drawn: portraits of emperors and nobles; court and hunting scenes; figures of birds; animals; gardens; flowers; leaves etc. were drawn. Also painted were the portraits of queens, princesses and other ladies. However, many scholar historians are of the opinion that in most of the cases the portraits of females could not be original because of the rigid pardah system among the Muslim communities. It was expected from the artists to make, rather paint, what they saw themselves and not copy anything. It was mainly due to this expectation, perhaps, that the works of Mughal Painting were mostly near to real and original.

The only defect that can be traced in the school of Mughal Painting that it did not select the lives of common man as media to depict the art. Therefore, the art produced by the artists of the Mughal School of painting did not come close to the lives of common men but remained limited to the courts of emperor and nobles of the day.Yet it can be claimed that the Mughal Painting occupies a most notable place in the history of India painting.