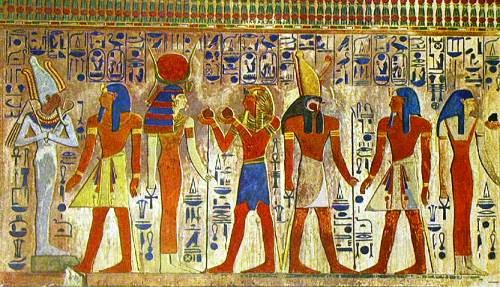 Ancient Egyptian Art is the painting, sculpture, architecture and other arts produced by the civilization in the lower Nile Valley from 5000 BCE to 300 CE. Ancient Egyptian Art reached a high level in painting and sculpture, and was both highly stylized and symbolic. Much of the surviving art comes from tombs and monuments and thus there is an emphasis on life after death and the preservation of knowledge of past.

Egyptian folk art often has eyes in it as a symbol of the goods watching upon the pharaohs. In a more narrow sense, Egyptian art refers to the canonical 2nd and 3rd Dynasty art developed in Egypt from 3000 BCE and used until the 3rd century. Most elements of Egyptian art remained remarkably stable over that 3000 year period with relatively little outside influence. The quality of observation and execution started at a high level and remained near the level throughout the period.

Symbolism also played an important role in establishing a sense of order. Symbolism, ranging from the pharaoh’s regalia (symbolizing his power to maintain order) to the individual symbols of Egyptian gods and goddesses, is omnipresent in Egyptian art.

Colors were more expressive rather than natural: red skin implied vigorous tanned youth, where yellow skin was used for women or middle-aged men who worked indoors; blue or gold indicated divinity because of its unnatural appearance and association with precious materials; the use of black for royal figures expressed the fertility of the Nile from which Egypt was born. The stereotype was employed to indicate the geographical origins of foreigners.

Ancient Egyptian art forms are characterized by regularity and detailed depiction of Gods, human beings, heroic battles, and nature, and were intended to provide solace to the deceased in the afterlife. Artists endeavored to preserve everything from the present as clearly and permanently as possible. Ancient Egyptian art was created using medium ranging from papyrus drawings to pictographs (hieroglyphics) and include funerary sculpture carved in relief and in the round form sandstone, quartz diorite, and granite. Ancient Egyptian art displays an extraordinarily vivid representation of the Ancient Egyptian socioeconomic status and belief system. Egyptian art in all form obeyed one law: the mode of representing Pharaoh, gods, man, nature and the environment remained consistent for thousands of years. The most admired artists were those who replicated the stylized depictions of Egypt most vegetated figure; humanity or divinity.

All Egyptian reliefs were painted, and less prestigious works in tombs, temples and palaces were just painted on a flat surface. Stone surfaces were prepared by whitewash, or if rough, a layer of coarse mud plaster, with a smoother gesso layer above; some finer limestones could take paint directly. Pigments were mostly mineral, chosen to withstand strong sunlight without fading. The binding medium used in painting remains unclear: egg tempera and various gums and resins have been suggested. It is clear that true fresco, painted into a thin layer of wet plaster, was not used. Instead, the paint was applied to dried plaster, in what is called “fresco a secco” in Italian. After painting, a varnish or resin was usually applied as a protective coating, and many paintings with some exposure to the elements have survived remarkably well, although those on fully exposed walls rarely have. Small objects including wooden statuettes were often painted using similar techniques.

Many ancient Egyptian paintings have survived due to Egypt’s extremely dry climate. The paintings were often made with the intent of making a pleasant afterlife for the decreased.