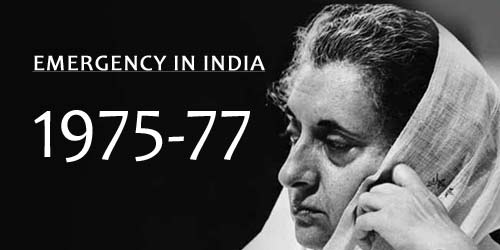 Emergency in India of 1975: A BREACH TO INDIAN DEMOCRACY

The constitution of India declares India as a democratic country which means the government of the country should always be people centric and all the citizens of India enjoy their individual rights. In addition to this, the provision of EMERGENCY (Article 352) was also included in the constitution which enables the government to take control of the whole situation in the case of External aggression (or) armed rebellion disturbing the internal peace.

During Emergency in India period, the citizens will lose all their fundamental rights and can be put into jail without showing any reason. The emergency in India was introduced only once in our country in 1975 during the rule of Congress Government, with Indira Gandhi as the Prime Minister and lasted till 1977.

The factors led to the proclamation of Emergency and the after consequences are as follows:

Factors that led to the Proclamation:

There were many incidents happened during the period 1973-75 which led to the imposition of Emergency in India. But, the root cause was the dictatorial behaviour of Indira Gandhi as a Prime Minister which received the wide range of criticism even from some of her own party members.

Even from her first election as a prime minister in 1966, Indira Gandhi always followed radical and oppressive methods to control the opposition parties and rebels of own party. Some important steps such as Nationalisation of Banks in 1969, employment programmes for poor people and so on gained her huge following in the masses and she was once again elected as the prime minister with the great majority in 1971 general elections.

In 1971, India waged a war with Pakistan and helped Bangladesh to secure its independence from Pakistan. After this, Indira Gandhi began to control the judiciary by challenging the power of Judiciary over the laws made by the parliament. She even appointed the persons of her own choice as the Judges of the Supreme Court and high courts. This behaviour earned severe criticism and many movements began to rise against the government.

On 12th June 1975, Allahabad High court gave the judgement that the election of Indira Gandhi as an MP is not valid as she was found guilty of doing malpractices during the election. After this Judgement, protestors led by JAYA PRAKASH NARAYAN, the famous socialist leader of JANATHA party flooded the streets of Delhi raising slogans against Indira Gandhi. This situation continued to prevail all over India for the next few days.

Finally, Indira made the president, FAKHRUDDIN ALI AHMED to proclaim emergency on the night of 25th June 1975 on the grounds of armed rebellion disturbing the internal peace of the country. This proclamation is regarded as the sole decision taken by Indira Gandhi to secure her own political interests.

Period of Emergency in India

The emergency in India period was characterised by following incidents.

ABOLITION OF FUNDAMENTAL RIGHTS: The people of the country lost their fundamental rights and they can be put in jail showing no reason.

ARREST OF POLITICAL OPPONENTS: Prominent leaders like JAYAPRAKASH NARAYAN, MORARJI DESAI, L K ADVANI and so on were arrested.

POSTPONEMENT OF ELECTIONS: All the state and parliamentary elections were postponed.

BAN ON PRESS: The government imposed the ban on press and print media suppressing the right of expression.

LAW MAKING BY ORDINANCES: Indira Gandhi enacted all the laws through president by making him to issue ordinances.

Like this, Emergency in India was prolonged till January 1977 and elections were called where people voted against the Congress party giving power to the JANATA PARTY at the centre. Thus, the 21 months period of Emergency came to an end.

Have a Look at: Civil Disobedience Movement

The period of emergency in India is considered as the darkest phase of independent India. The provision of showing internal rebellion as the reason for imposing emergency was also removed afterwards.