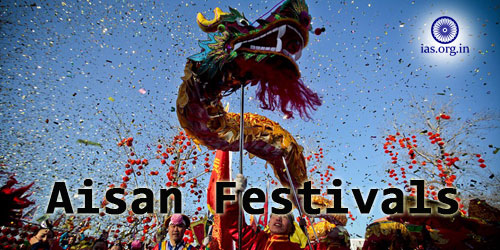 There are various kinds of festivals in the world celebrated by different countries exhibiting the different cultures, social and religious , the world encompasses in itself. Here are some important festivals that are celebrated in countries which are the part of the Continent of Asia:

The Gion Festival, a well known among festivals of Asia, is celebrated in the month of July in Kyoto, Japan. Kyoto was once the capital of Japan and people come here to celebrate this festival from around the world from ancient times.

The Gion Festival has a story behind its origin. In the year 869 a terrible disease swept Kyoto and the emperor prayed to the God for mercy. The king, after visiting the Gion shrine, offered there sixty six spears, one representing each province in the empire. After this, the disease disappeared and emperor ordered a huge procession in happiness. For this parade floats were made that were known as hoko. These are huge boxes weighing nearly ten tons. They are supported by wheels that are about 2.5 matre in diameter. One boy is chosen to be the festival’s page boy every year and he is dressed in the robes of a priest and get special attention. When the procession starts, he sits in his place of honour on the hoko and young men pull the ropes attached to it to move the hoko. Elders dressed in ancient court costumes had the parade. Good luck charms were thrown to the people by the men from top of the hoko. These charms are made up of straw, by wrapping it in bamboo leaves. Process end to the point from where it began, in the evening and the hoko is stored for the following year.

Thingyan is the festival celebrated in Myanmar as its new year. For them, New Year Day, falls in the month of Tagu-the first month of the Myanmar calendar- and corresponds to April.

It is also known as the water festival or Atar Festival. Thingyan means change-changing from one place to another.

Atar means period of time during which old year is changed into new year. This festival is about five hundred years old and originally, water was gently sprinkled on people using twigs as a blessing to wash away the past year’s sins and to make spirit and mind clean for the upcoming year.

Today, this festival is a lot of fun, as people throw buckets of water at each other and even at strangers. The streets are decorated and people sitting in big floats splash water on everyone passing by. There is also traditional singing and dancing in  the evening featuring traditional Thingyan dance. Most of the Burmese are Theravada Buddhists and they follow the tradition of washing the hair of elders and customs such as letting loose fish and cattle, on the third day of festival.

Tet Festival is the New Year festival of Vietnam and generally it is celebrated for about a weak. As the other festivals of Asia, preparations for Tet Festival begins month ahead with cleaning of houses and streets and shops selling clothes, candle, food and flowers.

They believe that Gods go back to heaven to report on the family some days before the festival. People send them with special ceremonies as they believe them to be good spirits who protect them. People keep a bamboo pole in front of the house to keep away bad spirits when the Gods are away.

As a part of Tet celebrations, the village of Dong ky celebrates the Firecracker Festival. The sixteen families are chosen each year who put up a fire cracker display after spending whole year and money on the plans of this event. Sometimes such huge firecrackers are made that it takes many men to carry them.The procession of crackers are taken along which ends up at a place where a tripod is set up to hoist the fire cracker.

After litting up the sixteen crackers, the priests and elders judge and decide the winning family that put up the best display.

In the month of October, a ten day festival namely Dasain is celebrated in Nepal. There is a story behind this festival. A long time ago, two demons, Madhu and Kaitava, ruled the earth and kept people under their terror. The Gods decided to end this fear and for this, Durga, the Goddess of power, disguised herself as Kali. Kali is the goddess of war and she challenged them on a duet. In the battle with Kali, the demons Madhu and Kaitava were killed and peace returned to the land.

Today, during the ten days of Dasain, Nepalese celebrate this occasion with puja. On the tenth day, a procession of weapons and a sword dance to commemorate Durga’s war, is performed.

Must Read: 10 Major Festivals of India

A sacred tooth relic of Lord Buddha is housed in a place named Kandly in Sri Lanka. The Kandy Esala Perahera is the procession in honour of that relic of Buddha and is celebrated in the month of August. This festival is said to be older than two thousand years. Kandy, which is a hill city, becomes the centre of pageantry for ten nights and a day during the festival and the temples are decorated for this purpose.

The Chinese New Year,well  known among the festivals of India, is also known as the spring Festival. The whole country celebrates a three day holiday and the celebrations from then on lasts almost two weeks. The preparations starts with cleaning of houses to get rid of bad luck of the past year. People do not sweep for first few days of New Year as they believe that all the new luck may sweep away. A general feast for the kitchen God is prepared a week before the Festival as the kitchen God keeps a watch on the fortunes of the family.The elder members of the family  give children red envelops with money in it called ‘hongbao’.

The Lantern Festival, that holds its place among the festivals of Asia, is the feast of the First Full Moon which is now celebrated as on the first full moon after the New Year.

Lots of lamps of different shapes are hung out on the streets and people gather to look at them. The jugglers and acrobats perform around the streets entertaining people. Lion dance is also a part of this festival, which is performed by two dancers hiding under lion costume and they make the lion jump and roll on the beat of drums.

This festival, forming a part of the festivals of Asia, is celebrated after the harvest in China as an occasion of thanks giving, of the moon and beauty of autumn. The farmers after harvest have the free time to enjoy the beauty of nature and they celebrate this festival at that time.

Tibetans have a culture, even after it has been made a part of China, that goes back centuries. The Tibetian culture is very different from that of Chinese culture as they still maintain many traditions,  that are special to them. The New Year Festival of Tibet is known as Losar. People of Tibet follow a type of Buddhism called Lamaism. Monks dress in masks and costumes and dances to depict the struggle between God and evils in the Festivals. People hang thangkas before a festival to remove evil spirits from their houses. Thangkas are paintings on fabric made in special way.