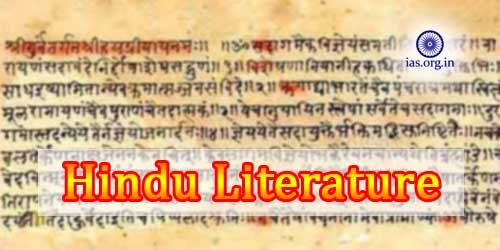 Historically, Hindu Literature, that is Hindu texts because ‘literature’ is a body that consists of texts (in the form of poetry or prose), can be classified into two broad categories:

Shruti as a body of ancient religious texts comprises the four Vedas that in turn includes its four types of embedded texts– the Samhitas, the Brahmanas, the Aranyakas, and the early Upanishads.

The Vedas, a vast body of Hindu literature, originated in ancient India before about 300 BCE. As Sanskrit is ordinarily applied to the whole ancient and sacred language of India in its Vedas and classical forms, the texts of Vedas are composed forms, the texts in Vedic Sanskrit.

Vedic Sanskrit differed from the classical Sanskrit as the Greek of Homer from of Attic Greek. The Vedic means of grammatical form is more rich and less fixed than that of Sanskrit. However, many case forms and verbal forms of Vedic grammar lost in Sanskrit.

In its phonetic structure, the Rig Vedic language had the same sounds as classical Sanskrit. With the passage of time, there was a change from the main Aryan Language to that of the Vedas and classical Sanskrit and later on to Pali and Prakrit. However, Sanskrit continued with an independent existence throughout the period of ancient India, but only as the language of the elite or Sistas.

There are four Vedas: The Rigveda, the Yajurveda, the Samaveda and the Atharvaveda. Each Veda has been sub-divided into four major text types: the Samhitas, the Aranyakas, the Brahmanas and the Upanishads.

Must Read: Food, Drinks, Pastimes and Amusements of Vedic Aryans

Rigveda: The Rigveda, a component of the large body of Hindu literature, is one of the four sacred texts (known as ‘shrutis’) of Hinduism. It contains 1,028 hymns and 10,600 verses. It contains ‘stanzas of praise’ and also ‘blessings and curses’ as well most of the stanzas which form the melodies of the Samveda. The earlier name of the Rigveda is Richah (‘stanzas of praise’).

Yajurveda: The Yajurveda is the Veda of prose mantras. As a component of the large body of Hindu literature, this ancient Vedic Sanskrit text is a compilation of ritual offering Mantras (formulas). Its composition, as estimated by scholars, is to be around 1200 to 1000 BCE.

The Yajurveda has been sub-divided into two groups namely, the black Yajurveda (Krishna) and the White Yajurveda (Shukla). The term ‘black’ implies unclear, unarranged and the term ‘white’ implies, clear, arranged. Yajurveda includes in itself one of the largest Brahmana texts ‘the Stapatha Brahmana’. The earlier name of Yajurveda is Yajumshi (liturgical stanzas and formulae).

Atharvaveda: As a late addition to the Hindu literature, to the Atharvaveda contains 730 hymns with almost 6,000 mantras (poetic stanzas and ritualistic formulae of the Vedas are known as ‘mantras’). It is the “knowledge storehouse of the procedures for everyday life”. About a sixth of its texts have been adapted from the verses of the Rig Veda. It has been compiled in about 1200 BC-1000 BC. Its earlier name is Atharvangirasah.

The Upanishads, collection of texts of Hindu literature, contain the core philosophical concepts of Hinduism. They are commonly mentioned as Vedanta, meaning either the last chapters, parts of the Veda or the object of the Veda. The central ideas of all Upanishads comprise the concepts of Brahmana (the Ultimate Reality) and Atman (soul, self).

As a collection of ancient Indian texts of Hindu Literature, the Brahmanas are commentaries on the hymns of the four Vedas. They are bulky expositions of the sacrificial ceremonial describing it in its minute detail, its value and its potency. They are written in connected prose.

The Rig Veda has two Brahmanas, the Aitarey and the Kaushitakim or Sankhayana. Sometimes the matter in the Brahmanas is linked with the text of Samhita, otherwise, it is independent of Samhita. Each Vedic Shakha has its own Brahmanas.

Brahmanas are principally known for their instructions on the proper performance of rituals. The oldest of Brahmanas is dated to about 900 BCE, while the youngest were completed by about 700 BCE.

As a component of the ancient texts of Hindu literature, the Aranyakas are the philosophy behind the ritual sacrifice part of the Vedas. They were either recited by sages living in the forests or conveyed by the teacher to his pupils in the solitude of the forests.

Aranyakas are sometimes called Karma-Kanda (ritualistic action). In the huge body of ancient Hindu literature, there is no true distinction between Aranyakas and Brahmanas.

There are mainly two types of Aryanakas:

Aitareya Aryanaka: it belongs to the Aitareya Shakha of Rig Veda. There are five chapters in this Aryanaka.

Taittiriya Aryanaka: it comprises ten chapters and belongs to the Taittiriya Shakha of the Black Yajurveda.