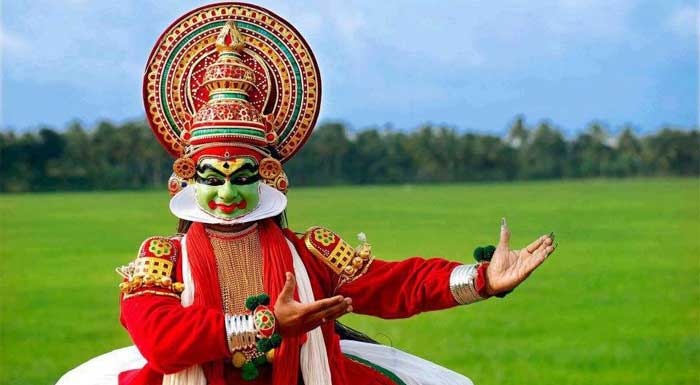 Kathakali is a form of dance drama which originated in Kerala in the 17th century. It was created by Zamorin of Calicut. It is an art form that has evolved from many social and religious art forms that existed in the ancient times in southern region. Some of those art forms being Ramanattam, Koodiyattam and Krishnattam. Kathakali is a striking blend of dance,music, drama and acting generally based on the Indian epics that is Ramayana, Mahabharata and other mythological stories of Krishna. It is characterized by elaborate costumes, attractive makeup, detailed gestures and refined body movements. Kathakali later also incorporated features of other folk and martial arts of Kerala known as Kalaripayattu. As this art form evolved over a period of time, the artists started using a combination of both the languages that is Malayalam and Sanskrit to cater to the masses. This combination of Malayalam and Sanskrit is called Manipravalam. Traditionally there are 101 classical Kathakali stories.

Must Read: Kathak An introduction 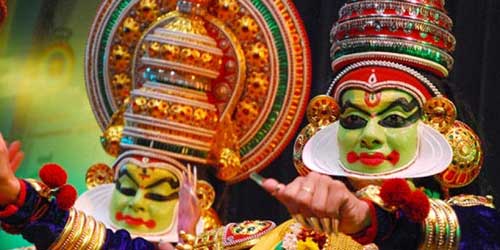 Kathakali is enacted by various hand movements called hasta mudras, facial expressions called rasas and body movements. It incorporates all the aspects of abhinaya and those are angika, aharya, vachika, satvika, nritta, nritya and natya. There are 24 basic mudras or gestures in kathakali and the main facial expressions of an artist are called ‘navarasas’.  Pacha, kathi, thadi, kari or minukku are the terms given to different kinds of characters.  The face of the artist appears like a mask due to the makeup that stands out while performance. The lips, eyebrows, and eyelashes are made to look prominently. Chutti, which is a mixture of rice paste and lime is applied on the face that helps in highlighting the makeup. Kirita is the headgear which is worn by all and the characters of Krishna and Rama wear a special crown adorned with peacock feathers. A small knob called chuttippu is fixed on the nose and the centre of forehead which is a particular feature of the character that plays kathi or the anti-heroes.

Must Read: Folk dances of India

The kathakali  performance is done on a very simple stage. A large oil-fed lamp called villaku is placed in the front of the stage and the performance generally starts in the night and goes on till early morning. Tira Sela is the name given to the curtain behind which the main dancers stand before the performance. The Kathakali performance begins with calling the attention of an audience and the process is called kelilottu. It is followed by todayam where the blessings of the god are invoked. Purapaddu is purely a dance sequence and it is followed by melappada when musicians and drummers entertain the audience with their skills. Tiranokku is the time when all the characters enters on stage and thereafter the drama begins. Percussion instruments which are used are cheda and maddalam. A gong made of bell metal called chengila is also used which is struck with a wooden stick. Lead singers are called as ponnani and the followers are called singidi.

Kalamandalam Ramankutty Nair, Kalamandalam gopi and Madvoor Vasudevan Nair are some of the popular names in the field of Kathakali.