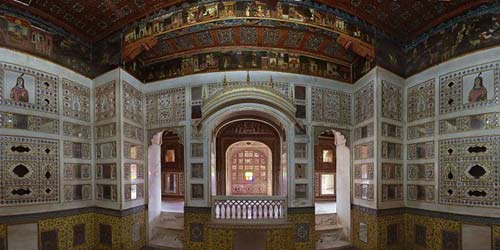 ARCHITECTURE OF THE MUGHAL PERIOD

Most of the monuments of India that are recognised as the world heritage sites belong to the Mughal period. These are known especially for their architectural brilliance. The Mughal architecture was inspired from the Persian style of building. With the amalgamation of Indian techniques to this style a new style called INDO-ISLAMIC style of architecture emerged.

The main characteristics of the Mughal architecture are facades with four-centred arches and semi-doomed roofs, vaults of intersecting arches, domes with inverted lotus tops, ornaments in marble carvings, PIETRA DURA (a technique used to create images with coloured stones) and so on.

All the monuments of the Mughal period possess the above characteristics. Even in the countries of Pakistan and Afghanistan, Nepal and Bangladesh also you can find the same features.

Read Also: The Later Mughals of the (Mighty) Mughal Empire

It was during the reign of Akbar that the Mughal architecture took a concrete form. Akbar was an enlightened patron of architecture. He encouraged the style of architecture with a mix of Indian and foreign styles. The main works of his time are:

HUMAYUN’S TOMB: This was the first monument built in the real Mughal style which was constructed in 1569 in Delhi. Standing on a high platform with typical Timurid design and Mughal scheme of Tomb gardens, the design of the tomb is of central Asian and Persian style.

AGRA FORT:It was the first major building project of Akbar’s time. The fort is an irregular semi-circle in a plan, with the massive wall built by huge blocks of RED SANDSTONE. The Hindu influence is strong in the style of building.

FATEHPUR SIKRI:The most remarkable architectural project of Akbar was the creation of the city FATEHPURSIKRI near AGRA, to commemorate the birth of his first son JAHANGIR. The buildings in the city are mostly built of Red Sand Stone.

The most important buildings are PANCH MAHAL (a five-storeyed structure), PALACE OF JODHABHAI (with rich interiors), DIWAN-I-KHAS (official court with over hanging galleries and central pillar), JAMA MASJID (Islamic in design but Hindu style also employed).

The other important architectural monuments of Akbar’s time are BULAND DARWAZA, TOMB OF SHAIKH SALIM CHISTI and so on.

Must Read: The Administrative System under Delhi Sultanate

The architecture of Jahangir’s period is more like a continuation of Akbar’s architecture. The important works are

AKBAR’S TOMB: It was constructed in Sikandra near Agra. The marble trellis work with raised platforms, tiles decorated with golden painting and the garden of char bagh design are the main notable works. The design is similar to Buddhist viharas.

The other architectural works of this period are TOMB OF ITIMADUD-DAUL, TOMB OF ABDUL RAHIM KHAN and so on.

In the Shah Jahan’s period, there was a transition in the architecture from robust style to pretty and elegant style. We can say that the ShahJahan’s period was an age of marble buildings. The style of PIETRADURA was the important characteristic of this period.

RED-FORT: The RED-FORT, which was constructed in Delhi was similar to that of the AGRA FORT. But, the pleasing style of Shahjahan reflects in every architectural work ranging from Pietra dura paintings and domed kiosks to massive walls and marble water canals.

JAMA MASJID: This Masjid which was built in 1656 in Delhi is one of the most impressive mosques in the world with an amalgamation of RED SAND STONE and WHITE MARBLE.

TAJMAHAL: TAJMAHAL, the crown of all palaces, was built by Shah Jahan in Agra in the memory of his late beloved wife MUMTAZ BEGUM. It took nearly 14 years to complete this stupendous architectural piece. The White marble used is of the best quality. The Pietra dura ornamentation, arabesques and scroll works of floral forms are the major architectural works. The ornamental gardens, with long rows of water courses and fountains, add to the beauty.

The Mughal architecture declined after Shahjahan as his successor, AURANGZEB paid no attention to the fine arts.

The architecture of the monuments of the Mughal period is a visual splendour, enhancing our cultural heritage.

The Revenue System under Mughal Administration