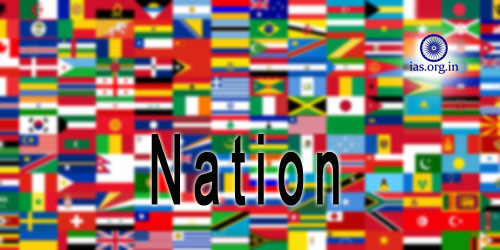 There is a thin line of separation, in the context of the meaning, between the term ‘nation’ and ‘nationality’. This distinction is so thin that some even consider them interchangeable; this has become so much pronounced because both these terms have their origin in the same word. The term Nationality, derived from the Latin word natus (to be born), means belonging to the same racial stock or being related by birth or having blood relationship. However, in modern times, this understanding of nationality is confusing of rather misleading because there is today hardly a single nation in the world whose people belong to the same racial stock. Every nation has people of mixed racial background.

It is because of immigrations, inter-caste and inter-racial marriages, the increased racial combinations have made it difficult to find racial purity. So it can be ascertained that the development of nationality is neither political nor social but definitely a psychological phenomenon. Discussing the term J.W. Garner has stated that nationality is a culturally homogenous group that is at once conscious of its unity.

A nation, in the words of Ramsay Muir, may be defined as a body of people who feel themselves to be naturally linked together by certain affinities, which are so strong for them to live that they become unsatisfied when disunited and cannot tolerate subjection to people who do not share the same ties; while, the growth of nationality is undoubtedly a psychological phenomenon; according to Hayes it is primarily cultural, conscious of unity.

One of the major elements of nationality is people living in a common territory because they are most likely to develop a common culture and, in addition, this is the reason why the countries are called motherland or fatherland. The identity of the people are also seen with their country; thus people of India are called Indian and the people of America as American and so on. However, this point cannot be stretched too far because common territory cannot be taken as an absolutely element of nationality. For instance, the Jews, before the creation of Israel, were scattered all over the world; they had no common territory, yet they constituted a strong nationality.

The idea of common race denotes that people belonging to a particular nationality have a social unity or belong to one group. The idea of nationality is strengthened by the belief that one belongs to the same race, it hardly matters whether it is real of factious; the idea becomes more important in the sense that it strengthens common language, common traditions and common culture.

As an element of nationality, religion is important because a common religion is an incentive to national feeling. For instance, England fought against Spanish Armada primarily due to her determination to safeguard and defend Protestanism. However, in today’s world, nationalities incline to become multi-religious and there is a trend, increasing with great pace, that regards religion as a private affair of an individual and due to which secularism prevails in the collective life. Thus, religion as a factor is not a necessary one. It can be fairly concluded that religion cannot always play a role of cementing factor; for instance, Pakistan got separated into two countries despite the common religious affinity among its people. Religion, in the context of the Indian sub-continent, worked negatively as Pakistan came into existence on the basis religion by partitioning India.

A common language, a medium of communication, is h basis of all the other elements of nationality as it enables the people to express their idea. A common language does not mean only a common literature but also common heritage of historical traditions as a common language creaters a cohesive society. Many nations, such as England, have been formed on the basis of a common language: England as a nation developed from the English language. However, in today’s world where one can find many bi-lingual or multi-lingual nationalities, this factor seems unnecessary; for instance the English Language, this modern world, has now got the status of a global language that is Spoken in all parts of the world and it can now not be associated only with England.

It has been argued that nationality, historically, emerged as a result of amalgamation of various tribes and clans. In a primitive society the existence of nationality cannot be thought of. According to Marxists, nationality had no place in a slave owing or a feudal society, and it emerged and developed due to the emergence of capitalist mode of production. Although the importance of economic factor as an element of nationality cannot be denied, it on its own cannot create a nationality.

In the rise and development of national movements in the Afro-Asian countries common subjugation has been a dominant factor. For instance, in India a common Indian nationality arose and acquired firm roots due to the common colonial exploitation.

Although in the development of nationality all the factors mentioned above assist, none of them can be claimed as absolutely essential. Nationality, ipso facto, indicates to a subjective sentiment that cannot be put in words in the form of a precise definition in terms of any objective factor.

Distinction between Nation and Nationality