My account
Get into your account.
LoginRegister
Plans
Home Learn History Phases of British Rule in India 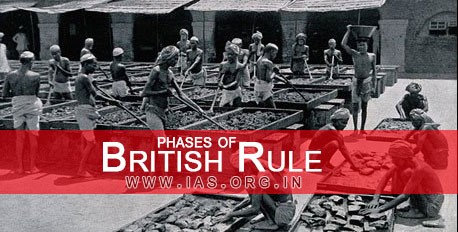 The twin processes of drain and de-industrialization were carried out extensively through the various stages of British rule in India (colonial rule).

The process itself started from 1757 when with the battle of Plassey, the East India Company, representing the British mercantile class, took over the Indian control. During the same period, a fundamental change was taking place in Britain by a series of inventions leading to the Industrial Revolution.

For example spinning-Jenny of Hargreaves in 1764; Watt’s steam engine in 1765; water-frame of Arkwright in 1769; Crompton’s mule in 1779; Cartwright’s power-loom in 1785; and the steam-engine applied to blast furnaces in 1788. Before these inventions, the Bank of England was established in 1694 and plunder of India helped capital accumulation and inventions helped in generating Industrial Revolution.

The transformation in England created new interests and East India Company became the target of attacks in England and finally its fate was sealed by the War of Indian Independence in 1857.

The impact of the British rule, in the initial stages, has been summed up by R.P. Dutt:

“While machine-made cotton goods from England ruined the weavers, machine- made twist ruined the spinners. Between 1818 and 1836, the export of cotton twist from England to India rose 5,200 times.

The same process could be traced in respect of silk goods, woolen goods, iron, pottery, glass and paper.

The effects of this wholesale destruction of the Indian manufacturing industries on the economy of the country can be imagined. In England the ruin of the old handloom weavers was accompanied by the growth of the new machine industry. But in India, the ruin of the millions of artisans and craftsmen was not accompanied by any alternative growth of new forms of industry…. The old populous manufacturing towns, Dacca, Murshidabad, … Surat and the like, were in a few years rendered desolate under the ‘Pax-Brittanica’ with a completeness which no ravages of the most destructive war or foreign conquest could have accomplished”.

The merchant capital of the British, found new opportunities in India, when, Company started its conquests, in which monopolistic buying of Indian material was undertaken by the revenue earned from India, and they were exported to foreign markets with maximum profits. The pre-industrial British capital, instead of making so-called “investments”, were buying Indian commodities for profitable exports on the basis of money earned from revenue in India.

Thus, the conquest of India by the British East India Company gave it the ‘power to levy and collect land revenue and other taxes’, and, on the basis of the gross profits the Company exploited Indian commodities. This ‘semi-bondage’ situation of India made the British mercantile capitalism earn “tribute from conquest”. According to Professor Habib, during the later half of eighteenth-century, the total British imports from India increased from 12 per cent to 24 per cent, and the British exports to India increased from 6.4 per cent to only 9 per cent of the total British exports.

The phase of merchant capitalism gave way to the phase of Industrial Capitalism towards the beginning of the 19th century. Now the emphasis shifted from revenue collection and trade to new forms of surplus appropriation. Indian economy was now geared to serve the interests of industrial England. India was now used to provide raw material to the industries of England and a market for the ready made British manufactured industrial goods. Indian resources continued to be drained out to England, although in different forms. Similarly, the process of de-industrialization also got accelerated.

After 1857, when the British Government took on direct control of India, some British capital also started pouring into the Indian market, along with the manufactured goods. This was the result of the accumulation of capital at an unprecedented level in the leading industrial countries. Now England needed India, not only as a market for their goods but also as a favorable ground for the investment of their capital.

As a result, India started getting industrialized, but only on foreign capital. All the major industries like Railways, Jute, Iron, and Steel (with the exception of cotton textiles) were being run by British capital. Its result was a further drain of wealth, as all the profits made on British capital were going back to England.

Thus, up to the end of the nineteenth-century India was sucked by the British during both phases of colonialism i.e., during mercantile capitalism and industrial revolution in England.