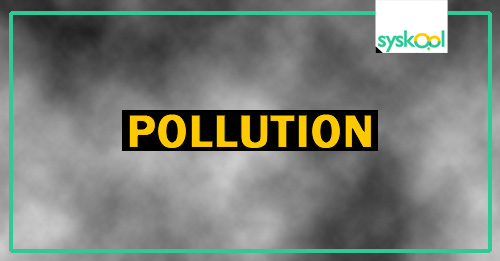 The addition of constituents to water, air or land, which adversely alter the natural quality of our environment is known as POLLUTION.

POLLUTION may also be defined as an undesirable variation in the physical, chemical or biological characteristics of our water, air and land that may or will harmfully affect human life or that of desirable species, our industrial processes, living conditions and cultural assets, or that may or will waste or deterio­rate our raw material resources.

Read Also: Bali and Copenhagen Summits of UNFCCC (CoP 13 and 15)

Entire world can be considered as a single vast ecosystem of the universe consisting of two parts :

(i)  Biotic Community (or Living Part)

That is, the BIOSPHERE in which life exists. The lack of living creatures and the disbalance in their life balance gives rise to the crises in the biological community.

The abiotic or physical environ­ment of all the organisms existing on the earth or globe exists in three main zones: ATMOSPHERE, LITHOSPHERE, and HYDRO­SPHERE.

The root cause of environmental pollution has been man’s misbe­haviour with nature. Albeit, there are several reasons for environmen­tal pollution, for example :

(i)  Harmful gasses in the atmosphere

The concentration of harmful gasses is increasing! day by day in the atmosphere. Increasing carbon dioxide (CO2) content will warm up the earth’s atmosphere to such an extent that it will melt the polar ice and will cause a subsequent rise in the sea-level. Thus, low-lying areas will be submerged carbon-dioxide is harmful to our health. Carbon- monodioxide, sulfur dioxide (S02), hydrogen sulfide, nitrogen oxides, ozone etc. also constitute the other harmful pollutants.

Dumping of tons of sewage, dead humans and animals and domestic wastes from cities into the water reservoirs are one of the major causes of water pollution. Discharge of untreated or partially treated sewage may cause (a) depletion of oxygen content caused by biological oxidation of organic matter; and (b) stimulation of algae growth.

Must Read: Startling Facts about Pollution

The above effects affect the diverse uses of water.

Insecticides used to kill insects which destroy (damages) our crops, spread several diseases in man after spraying are washed off to the rivers and lakes and become a part fish body and other animals there. In the same way, pollution of food grains by insecticides and pesticides and the various diseases caused by such food grains are also well known.

The air becomes foul by the exhaust from the internal combustion engines of automobiles used for personal conveyance, transport of goods and passenger traffic in the modern world. This polluted air is unhealthy for breathing.

Carbon-mono dioxide a deadly poisonous gas discharged from the automobiles and factories is a serious problem in big cities of the world. It causes ‘headaches’, ‘lost of vision’, ‘nausea’, ‘pain’, ‘convulsions’, ‘asthmatic spasm’ etc.

FERTILIZERS applied in the fields are also washed off into streams, rivers, and the seas. Here they increase the growth of algae (algae is a microscopic green plant). These algae consume the oxygen of water much more than they returned to the water in dissolved state (during photosynthesis). In short supply of oxygen, the animal living in water become suffocated.

DETERGENTS also cause a serious pollution problem to the fresh water resources. Major ingredients of most detergents are phosphates. When discharged into the water they support the luxuriant growth of algae.

Some common antipollution mea­sures are in the following manner:

(a)    Planning trees on the road­sides; laying parks and gardens in the spacing houses and colonies.

(b)    Keeping a check on the quality of fuels meant for automobiles etc.

(c)    Less use of oil and coal for running factories.

(ii)    Noise Pollution, may be checked by

(a)    Making highways, circular and ring roads, not in close touch with towns and cities.

(b)    The Methodical spacing of office hours of different categories, school and colleges, factories and industries.

(c)    Restrictions on the use and volume of loudspeakers pressure horns of vehicles etc.

(iii)   Soil Pollution, may be reduced by

(a)    Training the people for hygiene and sanitation.

(b)    Providing lavatories and proper hygienic conditions; recycling of scrap and other waste material.

(e)    Restriction on the use of chemicals which are otherwise fatal to plants and animals.

(iv)   Water Pollution, can be reduced by

(a)    Proper disposal of sewage, dreading of shallow rivers and streams and cleaning operations in lakes.

(b)    Effective filtration and chlorina­tion of drinking water.

(d)    Checking of  random disposal of factory wastes, especially into rivers which are the major source of drinking water.

(e)    Use of bio-reactors to fight organic pollution of water.

(f)     Nuclear explosions should not be done in seas.

Most Polluted Cities in India