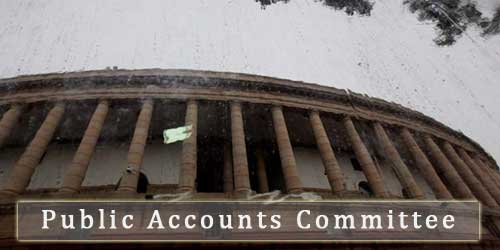 The Public Accounts Committee (PAC) is a committee of selected members of Parliament, constituted by the Parliament of India, for the auditing of the expenditure of the Government of India.

The Public Accounts Committee (PAC) signifies one of the essential constituents of Parliamentary Dominion which is the culpability of Public money. The committee may examine the expenditures, administration, delegated legislation, public petitions and policies of the Ministry concerned and its associated public bodies and may forward its report of findings and recommendations to the Ministry and the Ministry shall submits its reply to the Committee.

An important function of the Committee is to ascertain that money granted by Parliament has been spent by Government “within the scope of the demand”. The functions of the Committee extend “beyond the formality of expenditure to its wisdom, faithfulness and economy”. The Committee thus examines cases involving losses, nugatory expenditure and financial irregularities.

The Public Accounts Committee is assisted by the Comptroller and Auditor General in the examination of Accounts and Audit Reports.

A designated body that seeks to be authorized to license and govern the activities of its members as public accountants must meet certain minimum standards relating to its: