On May 17, 1498, Vasco da Gama, a Portuguese voyager reached Calicut (now known as Kozhikode) on Malabar coast. Zamorin was the king of Calicut at that time. Vasco da Gama was appointed by Portuguese King Manuel I.

This Historic voyage successfully established a sea route from Europe to India. This sea route became major trade route as it gave European a safer alternative to reach far east without through the costly and unsafe silk road caravan routes of Middle East and Central Asia.

The Capital of Portuguese empire in India was cochin in their early years. In 1530, Nino-da-Chuna transferred the Portuguese capital in India from Cochin to Goa, now Goa became center of Portuguese rule in India which lasted till 1961. In 1535, he acquired Diu and Daman in 1559.

Portuguese had various other territorial possessions in Indian ocean and their Governor in Goa had authority over all these territories like Mozambique, Macau, Solar, Timor etc.

During the reign of Shahjahan Portuguese lost Hugly in 1631. In 1661, Portuguese king gave Bombay to Charles II of England as dowry for marrying his sister. Gradually they lost many of their territories. 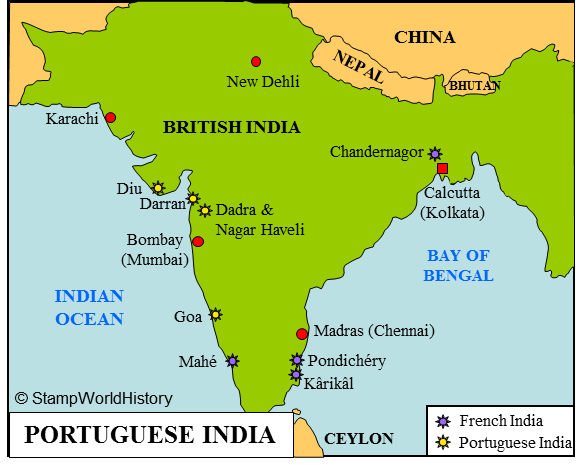