My account
Get into your account.
LoginRegister
Plans
Home Learn Polity President vs Governor – Power and Position 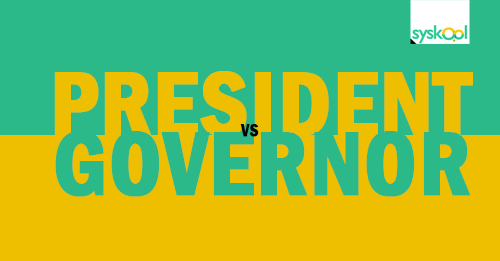 Other than all the discretionary powers of the President, a Governor enjoys the following powers, which are not enjoyable with the President.

Exercising powers under Art. 200, the Governor can reserve the Bill passed by the State Legislature for the President’s consideration. Such power is not available to the President.

The Governors of certain States have been granted ‘Special Responsibilities’ under the Constitution (Art. 371). In fact, this power has been invested in the office of the President who directs the State Governors to perform specific work/duties. The ‘Special Responsibility’ is totally at the discretion of the Governor and his individual judgment cannot be questioned in any court of law.

Under the cover of Special Responsibility, the Governors of different States have different functions.

Thus, the office of the Governor is that of both dignity and authority, while that of the President is more of dignity and prestige.