In 1935, a new legislation was introduced which widened the franchise. On this basis, elections were held in 1937. The Congress contested the elections and formed governments in many provinces. These governments tried to implement some of the promises they had made like the release of political prisoners, greater attention to education and health, some relief to the peasantry, etc. they, however, remained in office for a short time.

In 1939, when Second World War broke out, the British government declared without consulting any of the Indian representatives that India was also a party to the War. The congress ministries resigned in protest. From then on, it was only a matter of time and preparation when the next phase of organized struggle would be started. 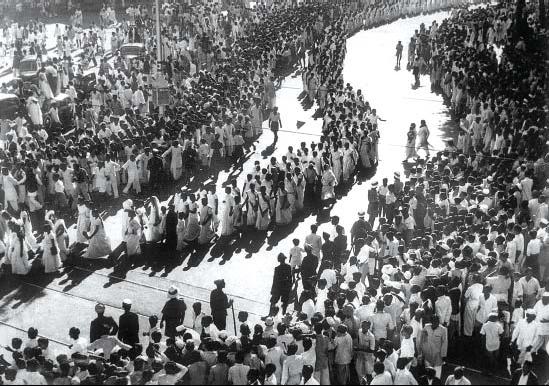 It was on 8th August 1942 that the Congress announced the ‘Quit India’ movement. Gandhi exhorted the people to ‘do or die’. The British government arrested most of the leaders before they could organize the movement. But this did not dampen the spirit of the people. New leaders emerged at local levels who led and sustained the movement.

As this movement lacked a central command and the government repression was at its highest, violence broke out everywhere. Railway stations, post office, and police stations were burned down. Railway lines and telephone and telegraph wires were cut.

In many areas, parallel governments were set up. Strikes and demonstrations were also organized and people attacked and disrupted the government transport system. The government replied with further repression. Thousands were killed and many more arrested. Although the government was able to crush the movement, it was now apparent that people wanted freedom from the foreign rule and they were prepared to use violence to this end.

Overview of the History of India over a Timeline