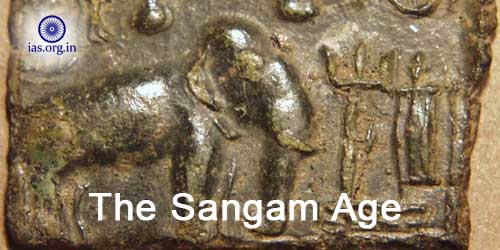 The Megalithic cultures, dated between 1200BC-300BC, of early history of South India was followed by the Sangam Age. Megalithic people followed agro-pastoral activities for their livelihood.

The Sangam Age points to that period in the early history of South India when large numbers of poems in Tamil were written by many authors. The term ‘Sangam’, here, indicates to an assembly or “meeting together” of Tamil poets. According to traditional history, three assemblies were convened one after another. All these three Sangams took place under the patronage of th Pandaya Kings of Madurai, at different places.

The Sangam Literature, belonging to the period from 300BC to 300 AD, records early history of South India. In fact the most remarkable feature of the Sangam literature is its vivid description of the contemporary society and culture of Tamilaham or Tamil region and its harmonious and peaceful interaction with the Aryan (northern) culture. Poems representing the Sangam Literature were authored on two broader themes of love and war. Later, it was put together in eight collections named Ettutogai.

Must Read: The Bhakti Movement of the Medieval Age

Political condition of the Sangam Age

Tamilaham, the region between the hills of Tirupati and the tip of Kanyakumari, was divided amongst large number of chieftains and the chieftainship was hereditary. The most famous and significant chieftains who established their domination during the Sangam Age were the Cholas who had their capital of Uraiyarpur; the Cheras who had their capital at Vanji (near karur); and Pandyas with their capital at Madurai. As the Cholas, Pandyas and Chiras had many subordinate chiefs, the main sources of their revenue were tribute along with plunder from these subordinate chiefs.

In the Sangam Age the entire Tamilaham was separated into five tinias (eco-zones). These zones were based on their economic resources as it is obvious from the name. They were: Karinji (hilly region); Palai (arid zone); mullai (pastoral tracts); marudam (wet lands); and neital (seacoast).

Society in the Sangam Age

In the Sangam period, although the concept of varna was known, social classes were not marked by higher or lower ranking as in north India. For instance, Brahmans in the society performed Vedic ceremonies and sacrifices and also discharge their duty as advisers of the chief but they were not provided any special privileges. People were known on the basis of their occupations. The rich lived in well decorated houses made of bricks and wore costly clothes while the poor lived in mud huts and had insufficient clothes to wear.

The memorial stones called nadukal or virukkal, raised in honour of those who died fighting, show the special position the war heroes had in the society; they were, in fact, worshipped as godlings.

That women belonging to the Sangam Age were educated, is clearly obvious from the fact that the Sangam literature consist of many poems written by women poets. In that period women were also engaged in economic activities such as cattle rearing, plantation, basket-making, spinning, etc. However, in Tamil society Sati was also prevalent and it was called tippayadal. But it appears that this custom of Sati was not obligatory as there are plenty of references of widows in the society. However, the status of women in general was more or less miserable as they were forbidden to decorate themselves of participate in any form of amusement.

Agriculture, craft and Trade were the economic activities in which the people of the Sangam Age were engaged. The important crop of the period was Paddy because it was not only the principal part of people’s diet but also a medium of barter exchange for inland trade.

As there are no perennial rivers in the Tamil region, the chiefs, generally, wherever it was possible for them, promoted agricultural activities by constructing dams and tanks. The Chola King Karikala of the Sangam Age constructed a dam on the river Kaveri. This dam is considered to be the earliest dam in the country. Spinning and weaving textiles cotton as well as silk was the most important among the crafts. Manufacturing salt was one of the significant economic activities.

The most significant characteristics of the Sangam economy was flourishing trade with the Roman World. A large number of Roman coins recovered in the South India are obvious examples of this fact. The main reason behind this flourishing trade was the discovery of monsoons and use of direct sea route between Indian Coasts and the Western World. This flourishing trade further resulted in the rise of important towns and crafts centres in Tamil region.

It has been described in the history, that Roman ships laden with gold used to come here and they took back with themselves large amounts of pepper.

Vinji, present day karur on Tamil Nadu, was the capital of the Cheras and also was an important centre of trade and craft. In the Sangam peoms, Madurai, the capital of the Pandayas, is described as a large city surrounded by a wall. It was a famous centre of fine textile and ivory working Korkai was an important Pandya port in the Tirunnelveli district of Tamil Nadu. This port was famous for its pearls.

The capital of the Cholas, Uraiyur (Tiruchirapalli in Tamil Nadu), was a grand city with magnificent building. Puhar or Kaveripattinam was the principal Chola port. The poems of the Sangam literature refer to the busy markets guarded by soldiers.

Must Read: Zoroastrianism-Introduction to Persian Religion

Region in the Sangam Age

The Sangam period, in the context of religion, was a symbol of a peaceful and close interaction between North Indian and South Indian traditions. The Brahmanas performing religious ceremonies popularized the worship of Indra, Vishnu, Siva etc. in South India. The presence of Buddhists and Jainism in the Tamil Nadu are also mentioned. The local people, particularly belonging to Kurinji, worshipped a deity known as Murugan, which in northern India was identified with Kartikeya, a war god.

The credit of recording the history of the Sangam Age goes to the Sangam Literature that through its poems on love and emotion (aham) and warfare and social behavior (puram) on the whole display a picture of political conflict, social inequality and economic prosperity of early Tamil region between 300 BC and 300AD.