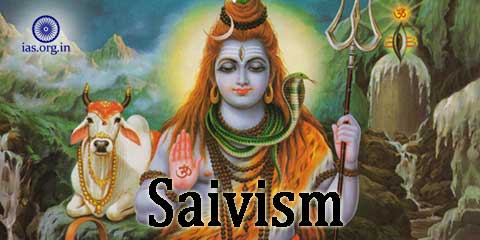 The origin of Saivism may be traced to, as the scholar-historian M.N. Das says, much earlier times that of Vaisnavism, however, both cults have been mentioned by Megasthenes in the fourth century BC. Some historians are firm in their opinion that Saivism in some form of other was common among the non-Aryans.

As a separate religious sect Saivism, with its own philosophy, may be traced to the Pasuputa form mentioned in the Mahabharata. In the Mahabharata the systems of Sankhya, Yoga, Panchtantra and Veda are also mentioned. Patanjali, and not only Megasthenes, in his Mahabhashya, has mentioned Siva-bhagvatas and Images of Siva and Skanda.

According to the Bhashyakara, the devotees of Siva used to carry an iron lance (ayah, sulikah) as the symbol of their deity. This ayah or Sulikah in its structure looked like the trishula (the iron trident). Among the devotees the practice of penance and other dhuta (rites) were prevalent.

Must Read: Religion: It’s Kinds and Impact on Indian Society

Till this time, the practice of Linga Worship had not come into existence, so people worshipped Siva and his two sons Skanda and Visakha. In the process and with the time images of Siva,Skanda and Vaisakha became a source of livelihood for their keepers (jivikarthe).

Saivism, the theistic sect, is mentioned in the Mahabharata as being prominent and widespread among the people. In this epic, the characteristics of Shiva are distinctly defined, rather elaborated, and include  some new features besides that of Vedic-Rudra that is supposed to be the pioneer of Siva-Saivism.

In the literature of the Sangam period too, in the South, Siva has been mentioned as the greatest of Gods.

References of Saivism in the Tamil country have been made in detail, in the two classics Silappadikaram and Manemekhala; these two classics are generally assigned to the first centuries of the Christian Era.

It is presumed that the phallic figure of Siva, as forms of the God, were at first enshrined in the main sanctum of the Siva temples but later on its became the great custom to place the Siva-linga (the phallic form) alone as the object of worship. The earliest figure of Siva is the famous Gudimallam linga near Renigunta, Madrass (now Chennai); this five feet high phallic symbol has on it a two-armed figure of Siva who is holding a ram in his right hand and a water vessel and battle axe in the left and standing on the shoulders of a malformed dwarf.

The fundamental concept of Saivism, based on a scientific and philosophical plank, is that ‘a changing cosmic force destroys as well as reproduces the universe’. Siva does not appear as an incarnate, although it has been mentioned in the Vayu and the Linga Puranas that Siva incarnated himself as a Brahmacharin by the name of Lakulin and had four pupils (Shishyas)’ namely, Kusika, Gargya, Kaurusha and Maitreya. The Pasuputa School, founded by Lakulin, has been mentioned in the Narayaniya section of the Mahabharata.

According to the philosophy of Saivism, Lord represents the force that rules the universe. It is the Lord who produces and destroys and therefore effects a change. The union of Purusha and Prakriti in an unceasing process, continually revealing itself in individuals who must have a beginning and an end. The Lord id both Creator and Destroyer.

Siva is described, on the basis of the nature of his activities, as a great ascetic and as a personification of the forces of nature. And not only this, Siva has been also identified with Time (Mahakala) and Death (Mrityu). Siva is, as presiding over procreation, Ardhanarishvara, half man, and half woman. He is Mahadeva, the Great God, Hara the seizer, Bhairava  the terrible, Bhavesa the lord of the world, Pasupati,  the lord of cattle, symbolizing human souls.

Siva  is  described as a powerful, wrathful and fierce but generous and bountiful God; one who spares nothing when pacified, and confers boons on his devotees.

Saivism in the North

The Pasupata, the earliest set of saivism referred in the Mahabharata, is linked to the early stages with the ‘Lord of Cattle’ but later on with the lord (pati) who helps his creatures (pasu) in attaining freedom from bondage (pasa).

The coins of the Indo-Scythian, Indo-Parthian and Kushana rulers depict the god Siva in human from who is reclining on his sacred bull, the Nandi. The popularity of saivism and its impact on Kushanas is quite evident from the fact that Wima Kadphses, a Kushan ruler, styled himself as Maheshvara ( a devotee of Mahesa, another name for Lord Siva).

From the sculptures as well as from inscriptions of the Gupta Period it becomes evident that the worship of Siva in his human from along with Uma Parvati  was in practice. A sculpture from Mathura, belonging to the period of late Kushana, shows Shiva  and Parvati  standing against Nandi.

Besides the Gupta rulers, saivism was also patronized by Sasanka of Bengal,  the rulers of Pushpabhuti dynasty of Thaneshvajrkanauj  and the Maitrakas of Valabhi. The Huna king Mihirakula was also a Saivite.

The Chinese pilgrim Hiuen-Tsang in the middle of the seventeenth century AD has made several references to the cult of the Pasupatas and to the temples of Mahesvara at which the Pasupatas worshipped. The sect consisted of bairagis (ascetics) who besmeared their bodies with ashes, as well as householders, all of them being devotees of Siva.

The sects into which Saivism seems to have merged in later times were based upon scientific methods of redemption, with the advancement of religious, and philosophical thought linked with saivism.

Saivism in the South (India)

Saivism in the southern part of India flourished during the sixth century AD. Saivism was patronized by the Pallava rulers of the Deccan as well the Chalukyas and the Rashivakutas. The saivsim,  that prevailed in the south, was of the ordinary kind in which the praises of siva was sung in the Devaran (houses of God) in fervent devotion.

The system of philosophy linked to saivism was developed slightly later. The Periyapurana provides an account of sixty-three bhaktas (devotees) of Siva resembling Alvaras of the Vaishnavas. The Sangal literature mentions Siva and his accomplishments, while the Silappadikaram refers the panchakshora (the five letters of the mantra ‘Namah Sivaya’).

Saivism got great encouragement from life and work of Sankara, a spiritual genius, who was born in Kerala at Kaladi about the year AD 788. Sankara, although he was the greatest exponent of Advaita Vedanta, composed various hymns in praise of Siva, the God of gods.