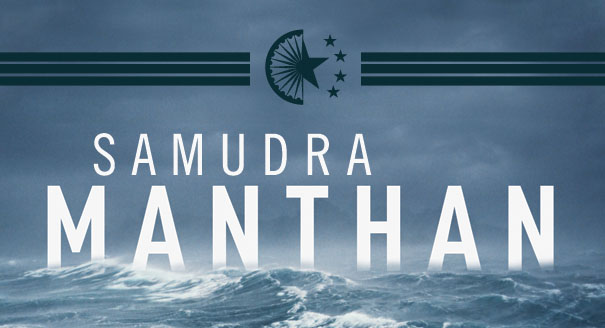 Samudra Manthan (C. Raja Mohan) : Invoking a tale from Hindu mythology Samudra Manthan or to churn the ocean C. Raja Mohan, head of the strategic studies programme at Observer Research Foundation in New Delhi, tells the story of a Sino-Indian rivalry spilling over from the Great Himalayas into the Indian and Pacific Oceans. He examines the prospects of mitigating the tensions and constructing a stable Indo-Pacific order.
America, the dominant power in the area, is being drawn into the unfolding Sino-Indian competition. Despite the huge differences in the current naval capabilities of China, India, and the United States, C. Raja Mohan argues that the three countries are locked in triangular struggle destined to mould the future Indo-Pacific. The book offers deep insights into the emerging Indo-Pacific theatre as the rising maritime profiles of India and China begin to intersect. C. Raja Mohan’s perceptive analysis of the US role in shaping Sino-Indian rivalry is a valuable contribution to the debate on changing great power relations in Asia and its waters.

Also, Read:
The Ocean and The Sea: Forms and Benefits
Mariana Trench, deepest place in the ocean, is full of life