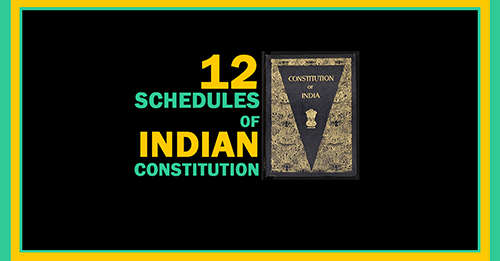 There are 12 Schedules in The Indian Constitution.

of constitution prescribes the various forms of oath or affirmation which various incumbents have to take before assuming a public office.

deals with seats allotted to various states and union territories in the Rajya Sabha (Council of States).

deals with the provision regarding administration and control of the scheduled areas.

deals with the provision regarding administration of tribal areas in the state of Assam, Meghalaya, and Mizoram.

Read Also: Legislative Relation Between Centre and State in India

gives the list of 22 regional languages recognized by the original Constitution (Assamese, Bengali, Gujarati, Hindi, Kannada, Kashmiri, Malayalam, Marathi, Oriya, Punjabi, Sanskrit, Tamil, Telugu and Urdu) the 15th (Sindhi) was added by the 21st Amendment in 1967; and three viz Konkani, Manipuri, and Nepali were added by the 71st Amendment in 1992. In 2004 four more languages were added to the Eighth Schedule viz Bodo, Maithili, Santhali, and Dogri. With this total number of regional languages increased to 22.

covers land and tenure reforms; the accession of Sikkim with India. It may be reviewed by the courts

introduces the “Anti-defection” provisions for Members of Parliament and Members of the State Legislatures.

constituted for Panchayats, for rural development.