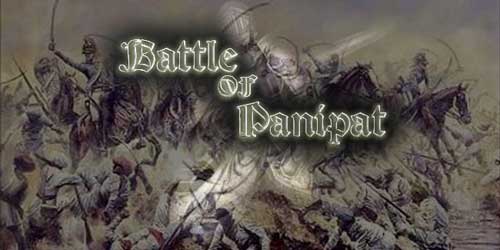 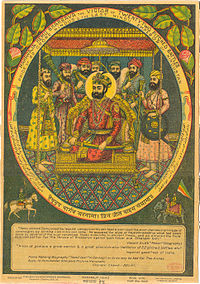 Second Battle of Panipat: On 24th January 1556 AD Mughal ruler Humayun slipped while climbing down the steps of his library and fell to his death. His son Akbar was only thirteen years old when he ascended the throne. At the time of Akbar’s accession to the throne, the Mughal rule was confined to Kabul, Kandahar, and parts of Punjab and Delhi. Akbar was then campaigning in Punjab with his chief minister Bairam Khan. On February 14, 1556, in a garden at Kalanaur, Akbar was enthroned as emperor. Hemu (Hemchandra) was a military chief of the Afghan King Muhammad Adil Shah who had established himself at Chunar and was seeking to expel the Mughals from India. Taking advantage of Humayun’s death, Hemu marched to Agra and Delhi in October and occupied it without difficulty, and became the ruler under the title ‘Raja Vikramaditya’.

To counter this, Bairam Khan (Akbar’s guardian) marched towards Delhi. On November 5 both the armies met at Panipat. Hemu with a large army including 1,500 war elephants had initial success. There was a pitched second  battle of Panipat and Hemu was on a winning spree when a stray arrow struck him in the eye. He fell unconscious. As in many other battles, the loss of the leader caused panic among the troops and turned the tide of the battle. The Mughals won the battle. Shah Quli Khan captured the Hawai elephant with its prize occupant and took it directly to Akbar. Hemu was brought unconscious before Bairam and Akbar. Bairam pleaded Akbar to perform the holy duty of slaying the infidel and earn the Islamic holy title of ‘Ghazi’. Among much self-congratulation Akbar then severed the head of unconscious Hemi with his saber.
Some historians claim that Akbar did not kill Hemu himself, but just touched the infidel’s head with his sword and his associates finished the gory ‘holy’ work. After the battle, Hemu’s head was sent to Kabul as a sign of victory to the ladies of Humayun’s harem, and Hemu’s torso was sent to Delhi for exposure on a gibbet. Iskandar Khan chased the Hemu’s fleeing army and captured 1500 elephants and a large contingent. Hemu’s wife escaped from Delhi with the treasure and Pir Mohammad Khan’s troops chased her caravan without success. There was a great slaughter of those who were captured and in keeping with the custom of his ancestors, Akbar had a victory pillar built with their heads. This battle, known as Second Battle of Panipat was an epoch-making event in the history of India as it resulted in re-establishment of the Mughal empire in India.
Also, Read:
Important Battles Fought In India
18 Wars of Medieval India Battles that changed destiny of India
Important Battles in the Indian History