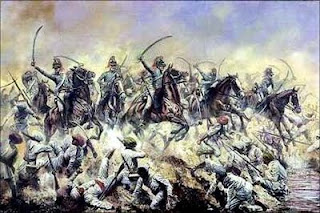 The first Battle of Panipat gave a death blow to the Lodhi empire and marked the end of the Delhi Sultanate’s rule in India. It led to the establishment of the Mughal Empire in India. Mongol prince Zahir-ud-Din Muhammad, known as Babur, had promised to help Daulat Khan Lodhi, Governor of Lahore, to fight the Sultan of Delhi Ibrahim Lodhi in 1523 and made many raids into Punjab. Babur, after occupying the whole of Panjab by 1525 AD, marched towards Delhi. In November 1525 he set out to meet the Sultan of Delhi. Passage of Indus took place on 15th December. Babur had about 12,000 soldiers. Crossing Sutluj at Roper and reached Ambala without meeting any resistance. On April 1st Babur reached Panipat. It was barren wasteland dry and naked with few thorny bushes. Rumors came that Sultan was coming with an army of 100,000 and 1000 war elephants. The Afghan Sultan of Delhi, Ibrahim Lodhi advanced from Delhi to meet the invader. Babur had a strong artillery which was effectively pressed into service.

The battle started at six in the morning. Sultan Ibrahim Lodhi advanced rapidly . At about 400 yards Babur’s Cannons opened fire, noise and smoke from the artillery terrified the Afghans and the attack lost momentum. Seizing the movement Babur sent out his flanking columns to envelop the Sultan’s army. Here the Afghans met for the first time the real weapon of Mongols ‘Turko-Mongol Bow’. Its superiority lay in the fact that it was the weapon of the nobles, of the finest warriors. Such a bow in the hands of a Mongol warrior would shoot three times as rapidly as musket and could kill at 200 yards.

Attacked from 3 sides the Afghans jammed into each other. Elephants hearing the noise of cannon at close range ran wildly out of control. Ibrahim Lodhi and about 6000 of his troops were involved in actual fighting. Most of his army stretching behind up to a mile never saw action. The battle ended in about 3 hours with the death of Ibrahim Lodhi who was at the forefront.

And in the place where fighting had been the fiercest, among the heap of Mongols slain of his sword, lay the vain but courageous Sultan Ibrahim Lodhi. His head was cut off and taken to Babur. Ibrahim Lodhi’s tomb is still present in Panipat. When afghans fled they left 20,000 dead and wounded. Losses to Babur’s army were heavy 4000 of his troops were killed or wounded. Had Sultan Ibrahim survived another hour of fighting he would have won, as Babur had no reserves and his troops were rapidly tiring in Indian mid-day sun. Babur observes in his autobiography, “The mighty army of Delhi was laid in the dust in the course of half a day.” In the words of Rushbrook Williams, “If there was one single material factor, which more than any other conduced to his ultimate triumph in Hindustan, it was his powerful artillery.” The elephants trampled their own soldiers after being frightened away by the explosion of gunpowder.

Two weeks later the victorious Babur entered Agra where he was presented with the famous diamond ‘Koh-i-noor’. Babur celebrated his victory in a lavish manner and occupied Delhi and Agra.