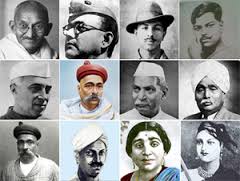 India is a land of great political leaders who ruled the country effectively and also by protecting its national interest. It was not an easy task to accomplish, keeping in view the changes taking place in the world political scenario. Leaders like Pandit Jawaharlal Nehru, Lal Bahadur Shastri, and Indira Gandhi Bose played an indispensable role in changing the perspective of the world towards India. The manner, in which issues like border disputes, Kashmir and growing shortage of food grains were handled, they really deserve an honor. They led the country from the front, without being showing any inclination to either of the power blocs. Some of them are:

Bal Gangadhar Tilak
Bal Gangadhar Tilak was a social reformer and freedom fighter. He was one of the prime architects of modern India and strongest advocates of Swaraj (Self-Rule). He was universally recognized as the “Father of Indian Movement”.

Bhagat Singh
Bhagat Singh was among the prominent revolutionaries who shaped the base of a grand national movement. Following his execution, on March 23, 1931, the supporters and followers of Bhagat Singh regarded him as a “Shaheed”, “martyr”.

Chandrasekhar Azad
A contemporary of Bhagat Singh, Chandrasekhar Azad was a born firebrand revolutionary. He engaged in a heroic battle against the British. His role was crucial in inspiring the others of his generation to participate in the national movement for freedom.

Indira Gandhi
Indira Gandhi was, undoubtedly, one of the greatest political leaders of India. She was the first and only woman to be elected as the Prime Minister. She is also regarded as the most controversial political leader of the country for her unprecedented decision of imposing “a state of emergency”.

Jawaharlal Nehru
Jawaharlal Nehru was the first Prime Minister of independent India. He was a member the Congress Party that led the freedom movement against British Empire. Nehru was one of the architects who had the opportunity to steer the newly freed-nation. He was also the chief framer of domestic and international policies between 1947 and 1964.

Lala Lajpat Rai
Lala Lajpat Rai immensely contributed in attaining independence the nation. He helped in establishing few schools in the country. He also initiated the foundation of Punjab National Bank. In 1897, he founded the Hindu Orphan Relief Movement to keep the Christian missions from securing custody of these children.

Lal Bahadur Shastri
He devoted his life for the pride and honor of the country. Shastri was regarded as a man of principles. Lal Bahadur Shastri offered his resignation as Union Railway Minister; hours after he was made aware of a train accident that killed around 150 people.

Must Read: Rise of the Maratha Nationalism

Rajiv Gandhi
Rajiv Gandhi was one of the popular Prime Ministers of India. The developmental projects launched by him include the national education policy and expansion of telecom sector. Besides his achievement and subsequent popularity, Rajiv Gandhi also emerged as one of India’s controversial Prime Ministers.

Sardar Vallabhbhai Patel
Vallabhbhai Patel was one of the great social leaders of India. He played a crucial role during the freedom struggle of India and was instrumental in the integration of over 500 princely states into the Indian Union. Despite the choice of the people, on the request of Mahatma Gandhi, Sardar Patel stepped down from the candidacy of Congress president.

Sarojini Naidu
Sarojini Naidu was truly one of the gems of the 20th century India. She was known by the sobriquet “The Nightingale of India”. Her contribution was not confined to the fields of politics only but she was also a renowned poet. The play “Maher Muneer”, written by Naidu at an early age, fetched a scholarship to study abroad.