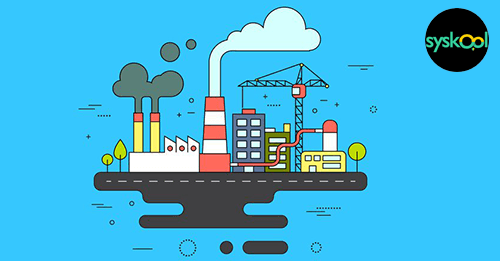 When a predominantly agrarian economy based on agriculture and handicrafts is transformed into an economy which is predominantly industrial; Industries and transport is mechanized; The production is carried on in factories, the transformation is called Industrial Revolution. The wage labour and commodity production is a basic characteristic of this mode of production.

Famous historian C. J. H. Hayes does not subscribe to this concept of Industrial Revolution. He writes, “So far-reaching has been the mechanical progress of last hundred and fifty years, and so profound its social consequences, that term ‘Industrial Revolution’ is customarily employed to describe it. A more accurate term would be Industrial Evolution, for ‘Revolution’ is apt to connote a sharp, sudden upheaval with results immediately apparent.” He goes on to argue, “The so-called Industrial revolution was not sudden, nor were its effects speedily appreciated. The process of improving manufacturing techniques, developing factory system and increasing industrial output has been long and evolutionary.”

Must Read: The Chinese Revolution

The Industrial Revolution took place first of all in England for the simple reason that the pre-requisites for such a revolution were present in England and not in any other country. These pre-requisites were capital, labour, techniques, resources, transportation, and markets.

For a large scale mechanized industrial production a lot of money i.e., the capital was required. It was needed for the purchase of land, machi¬nery, raw materials, transport and payment of wages. By the end of 18th century, England possessed enough wealth to convert it into capital. According to Pro. Hayes much of the industrial capital of England was self¬generated. The manufacturers saved a part of their profits and re-invested it in industries. But, this theory does not present a true picture of the way and method through which capital generated. By the end of 18th century, England had accumulated a lot of wealth through two means. At home, the enclosure movement cleared the ground for capitalist farming. This made agriculture more profitable and capital generating. Secondly, from abroad loot and plunder of colonial people, particularly of India, brought riches and money to enhance the volume of capital. Thus, it was the ruined and devastated peasantry of England and exploited people of colonies who paid for capital generation in England.
England put to best use the capital so generated. It was made possible by the fact that by this time it had developed a most efficient banking system to facilitate smooth financial transactions. The Bank of England played the pivotal i.e., the key role in this system. The Bank was established in 1694 A.D.

Labour is another pre-requisite of industrialization. The Enclosure Movement and large-scale capitalist farming that followed it ensured that this pre-condition of the industrial revolution is fulfilled. As Michele Beaud writes, “These changes in property and agricultural usage made available a considerable labour force deprived though it often was of the essentials for living. This labour force made possible an increase in mining and manufacturing production.” Hayes mentions the 100% growth rate of population in the 18th century as a contributory factor in the supply of labour force. But he also concedes that “Perhaps most important of all, labour was made available for factory production through the gradual destruction of the old peasant farming as a result of the enclosure movement.” Thus to quote Beaud again, “The personnel in the mill was at the beginning composed of the most disparate elements: peasants chased away from their village expansion of large properties, laid off soldiers indigents in the care of the parish, outcasts of every class and every trade.”

For a rapid mechanization of industries, it is necessary that techniques, process, and machines are invented and improved in a continuous process. In England in the 18th and early part of the 19th century, this process was going on at a very fast pace. Before the end of the 18th century, England had developed Flying Shuttle (John Kay, 1733), the Spinning Jenny (James Hargreaves, 1667), the Water Frame (Richard Arkwright, 1669), the Spinning Mule (Samuel Crompton, 1779) the Power loom (Edmund Cartwright, 1785), the Cylindrical calico-printing machine (Thomas Bell, 1785) and chemical bleaching and chemical dyes. What is of greater significance, “They had been successfully grouped in factories operated by water or even steam power.” As a result of which the factory cotton industry grew by leaps and bounds.

By the end of 18th century, England had developed an efficient and widespread network for transportation. It had a number of very good sea-ports which facilitated maritime trade and voyage. On the land construction of canals and roads was taken up in a big way. This network of roads and canals gave a great boost to trade and industry. Hayes writes, “Since no part of the country is much more than sixty or seventy miles from salt water, these roads and canals soon put many inland towns in a position to share directly in the growing British trade.”

No industrialized production can sustain itself unless there are markets to absorb its products. Even in this respect England was placed in a favourable position. By the beginning of 19th century England, Scotland, and Ireland formed a vibrant home market for industries of England. Outside this home market, the conquests in India also created a market for manufactured goods of England. Though the United States of America, was no longer a British colony, it still remained a big customer of British goods. Taking advantage of the French Revolution and Napoleonic wars the British traders and merchants had entered the markets of Latin America as well. Their presence was felt in the markets of Europe also. Thus, there was no dearth of markets for industrial products of England.

Role of the State

Thus, according to Hayes England had all the six pre-requisites and that is why industrial revolution first took place there but Hayes overlooks the role played by the state in facilitating the industrial revolution. Explaining this role Michel Beaud writes, “the state played a large role in this, with protectionist measures and the licenses and the monopolies of mercantilist policies, with political and military support for commercial and colonial expansion, with the police against the poor and suppression of the workers’ revolts.”

Don’t Miss: Contributions of Britain to the World

Industrial revolution or some may say industrial evolution was epoch-making in its impact. It caused a thorough transformation not only of economy but also of society, polity, literature, culture etc.

So far as an economy is concerned, the industrial revolution brought to an end the feudal mode of production based on traditional farming and handicrafts. The old economy was replaced by the new capitalist mode of production. The basic characteristics of the new mode were an introduction of the factory system, more and more use of machinery in production. Even the agricultural production was transformed. The old methods of production were replaced by new capitalist methods. The economic consequences of these changes were far-reaching. Production, trade, and commerce grew by leaps and bounds. This, in turn, led to the creation of enormous wealth. But this wealth was not distributed among the people in an equitable manner. It was concentrated in the hands of few. Therefore, economic inequality registered sharp growth. There were islands of prosperity in the ocean of poverty. Exploitation was intense. Unemployment was on the rise and the masses were condemned to live a miserable life.

The impact of the industrial revolution was on the political system of England as well.
Once a feudal society and economy began to be transformed into the capitalist society and economy, it was but natural that political system should also change accordingly. The feudal state made way to the capitalist bourgeois state. The process of democratization of political institutions was set in motion and was almost completed by the end of 19th century. The monarchy became constitutional; the supremacy of the Parliament was established; the franchise was made broad-based; the authority of the lower house i.e., the House of Commons became an established fact.

The social consequences of an industrial revolution were far-reaching. The old social classes survived but they lost much of their power and social prestige and privilege. The industrial revolution gave birth to new social classes i.e., the industrial bourgeoisie and the factory worker, also known as the proletariat. The agricultural labour class and the growing middle class which was going to play an important role in the future history of England also flourished. The emergence of new social classes gave birth to new social movements and conflicts. The Chartist Movement was the most important of them.

The industrial revolution influenced the trajectory of the growth of Science, technology, culture, literature, philosophy and ideology.

The pace of scientific advance was quickened. New inventions and new technologies rapidly followed each other. Liberalism, Humanitarianism, Utopian Socialism, Romanticism and Utilitarianism became the talks of the day.

Also Read:
Phases of British Rule in India
Inventions that changed the World