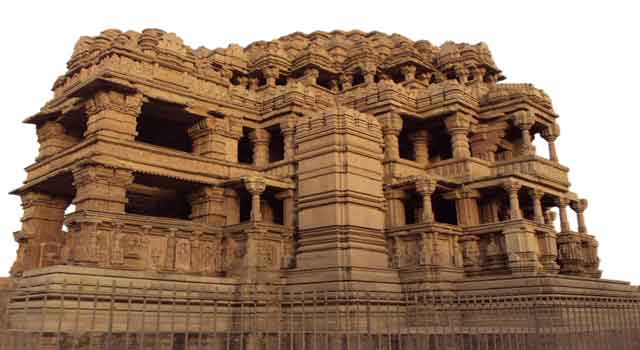 The Gupta Empire was an ancient Indian empire, founded by Maharaja Sri Gupta, which existed from approximately 320 to 550 CE and covered much of the Indian Subcontinent.  The peace and prosperity created under the leadership of the Guptas enabled the pursuit of scientific and artistic endeavours. This period is called the Golden Age of India and was marked by extensive inventions and discoveries in science, technology,  engineering, art,  dialectic,   literature, logic, mathematics,  astronomy, religion and philosophy that crystallized the elements of what is generally known as Hindu culture.

Chandra Gupta I, Samudra Gupta, andChandra Gupta II were the most notable rulers of the Gupta dynasty. The 4th century CE Sanskrit poet Kalidasacredits Guptas with having conquered about twenty-one kingdoms, both in and outside India, including the kingdoms ofParasikas, the Hunas, the  Kambojas, tribes located in the west and east Oxus valleys, the Kinnaras, Kiratas etc.

The Gupta period produced scholars such as Kalidasa, Aryabhata, Varahamihira, Vishnu Sharma and Vatsyayana who made great advancements in many academic fields. Science and political administration reached new heights during the Gupta era.

Decline of the Gupta Empire

The last great king of the Gupta was Skanda Gupta was ascended the throne about 455 A.D. Even during the later years of Kumar Gupta’s reign, the empire was attacked by a tribe called Pushyamitra but it was repulsed, And immediately after the accession of Skanda Gupta, Hunas made inroads, but they too were repelled.

The beginning the Gupta king Skanda Gupta tried effectively to stem the march of the Hunas into India, his successors proved to be weak and could not cope with the Huna invaders, who excelled in horsemanship and who possibly used stirrups made of metal, Although the Huna power was soon overthrown by Yasodharman of Malwa, the Malwa prince successfully challenged the authority of the Guptas and set up Pillars of victory commemorating his conquest (AD 532) of almost the whole of northern India.

The governors appointed by the Gupta kings in north Bengal and their feudatories in Samatata or south-east Bengal broke away from the Gupta control. The later Gupta’s of Magadha established their power in Bihar. Besides, the Maukharis rose to power in Bihar and Uttar Pradesh and had their capital at Kanauj. Probably by AD 550 Bihar and Uttar Pradesh and passed out of Gupta’s hands. And the rulers of Valabhi established their authority in Gujarat and Western Malwa.

After the reign of Skanda Gupta (467 AD,) any Gupta coin or inscription has been found in western Malwa and Saurashtra. The migration of guild of Silk weavers from Gujrat to Malwa in AD 473 and their adoption of non-productive professions show that there was not much demand for cloth produced by them.

The usual causes of administrative inefficiency, weak successors and stagnant the fall of the Guptas: dynastic dissensions, foreign invasions, and some internal rebellions.

Foreign invasions were the second major factor in the decline and disappearance of the Gutpa’s. The invasion of barbaric tribe Pushyamitra was not the decisive. A far more important invasion was that of the White Huns, who, after settling in the Oxus valley, invaded India. First appeared during the reign of Budhagupta.

After the reign of Buddhagupta, the status of certain, governors of North Bengal and Yamuna – Narmada area around Magadh too assumed independence and became to be known as the later Guptas.

The Gupta period is generally regarded as a classic peak of north Indian art for all the major religious groups. The most famous remaining monuments in a broadly Guptan style, the caves at Ajanta, Elephanta, and Ellora (respectively Buddhist, Hindu, and mixed including Jain) were in fact produced under later dynasties, but largely reflect the monumentality and balance of Guptan style.

Three major groups of causes, that led to the final disappearance of the Gupta empire, it is to be borne mind that no empire after the Mauryas was a reality. With the disappearance of the Mauryan empire no empire in its full connotation came into existence in India since we had no tradition like that of the Greeks where it is held that the State comes into existence for the necessities of life but continues to exist for the good of life, and man, by nature, is a political animal. Somehow, after the Mauryan era the thinking of India became apolitical. The first factor that contributed for this outlook of Indians was the emergence of feudalism about which evidence is there from the days of the Satavahanas. This tendency grew in the Christian era and was firmly established by the seventh century AD.