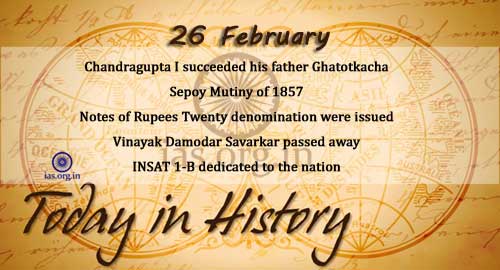 Chandragupta I succeeded his father Ghatotkacha at Patliputra. He is known for establishing the Gupta dynasty. Gupta era begins.

First Indian Revolution called the Sepoy Mutiny ends in a few months with the fall of Delhi and Lucknow which broke out in Berhampore by the 19th Bengal Infantry.

Sir Benegal Narsingh Rao, an eminent lawyer and political leader, was born. He was the first Indian President of UN Security Council in 1950.

The notes of Rupees Twenty denomination were issued with two issuing circles. These notes had four numeric denominations.

Vinayak Damodar Savarkar ‘Veer’, great revolutionary freedom fighter, social reformer, politician and writer, passed away at the ripe old age of 83. He was known for the first person to flee by swimming from Port Blair Jail and was associated with right-wing Hindu Mahasabha, started the Abinav Bharat as a secret society of revolutionary terrorists. He was a great Novelist and Poet.

Also Read: Did you know these basic facts?

Satellite INSAT 1-B dedicated to the nation by Prime Minister Indira Gandhi.