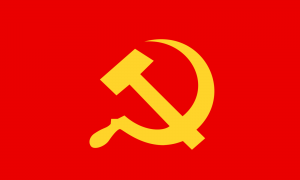 Communism is a socio-economic system structured upon common ownership of the means of production and characterized by the absence of social classes, money, and the state; as well as a social, political and economic ideology and movement that aims to establish this social order.

Communism was first developed into a scientific theory by German philosopher and social scientist Karl Marx, and the collective understanding of this scientific approach is today commonly referred to as Marxism. According to Marxism, capitalism is a historically necessary stage of society, which has led to the concentration of social classes into two major groups: proletariat – who must work to survive, and make up a majority of society – and bourgeoisie – a minority who derive profit from private ownership of the means of production.

The political, social, and economical conflict between both groups (class struggle), each attempting to push their interests to their logical extreme, will lead in to the capture of political power by the proletariat.The result is communism: a stateless, classless and moneyless society, structured upon common ownership of the means of production.

Communism, the political and economic doctrine that aims to replace private property and a profit-based economy with public ownership and communal control of at least the major means of production (e.g., mines, mills, and factories) and the natural resources of a society .Communism is thus a form of socialism—a higher and more advanced form, according to its advocates. Exactly how communism differs from socialism has long been a matter of debate, but the distinction rests largely on the communists’ adherence to the revolutionary socialism of Karl Marx.

Marx identified two phases of communism that would follow the predicted overthrow of capitalism: the first would be a transitional system in which the working class would control the government and economy yet still find it necessary to pay people according to how long, hard, or well they worked; the second would be fully realized communism—a society without class  divisions or government, in which the production and distribution of goods would be based up on the principle “From each according to his ability, to each according to his needs.”

The October Revolution, led by Lenin, consisted in the capture of political power in Russia by a Marxist party, resulting in the creation of the Soviet Union, with the aim of developing socialism and eventually communism.

Communism is the idea of a free society with no division or alienation, where the people are free from oppression and scarcity. A communist society would have no governments, countries, or class divisions. In Marxist theory, the dictatorship of the proletariat is the intermediate system between capitalism and communism, when the government is in the process of changing the means of ownership from privatism to collective ownership.

Marx and Engels maintained that the poverty, disease, and early death that afflicted the proletariat (the industrial working class) were endemic to capitalism: they were systemic and structural problems that could be resolved only by replacing capitalism with communism. Under this alternative system, the major means of industrial production—such as mines, mills, factories, and railroads—would be publicly owned and operated for the benefit of all. Marx and Engels presented this critique of capitalism and a brief sketch of a possible future communist society in Manifesto of the Communist Party (1848), which they wrote at the commission of a small group of radicals called the Communist League.

Marx, meanwhile, had begun to lay the theoretical and (he believed) scientific foundations of communism, first in The German Ideology (written 1845–46, published 1932) and later in Das Kapital (1867; Capital). His theory has three main aspects: first, a materialist conception of history; second, a critique of capitalism and its inner workings; and third, an account of the revolutionary overthrow of capitalism and its eventual replacement by communism.

In the 19th century, Karl Marx described these social reformers as “utopian socialists” to contrast them with his program of “scientific socialism” (a term coined by Friedrich Engels).

Communism, the main characteristic of human life in class society is alienation; and communism is desirable because it entails the full realization of human freedom. communism’s outlook on freedom was based on an agent, obstacle, and goal. The agent is the common/working people; the obstacles are class divisions, economic inequalities, unequal life-chances, and false consciousness; and the goal is the fulfillment of human needs including satisfying work, and a fair share of the product.