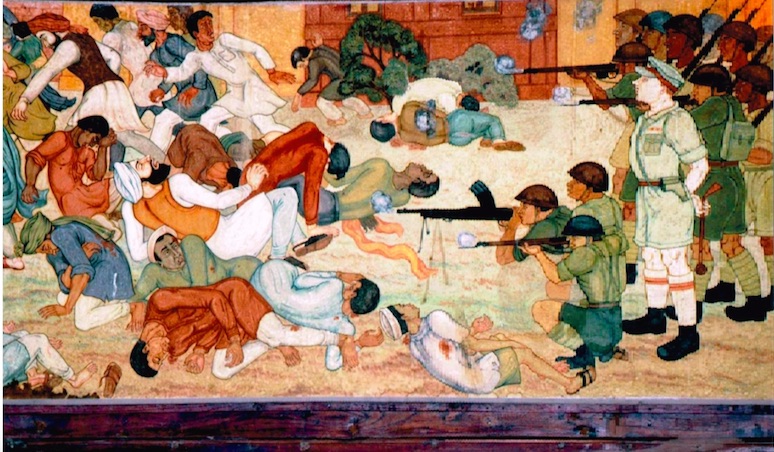 The East India Company had established its control over almost all parts of India by the middle of the 19th century. There were numerous risings in the first hundred years of British rule in India. The risings developed a tradition of resistance off reign rule, culminating in the 1857 revolt.

The Revolt of 1857, which was called a Sepoy Mutiny by British historians and their imitators in India but described as “the First War of Indian Independence” by many Indian historians, shook the British authority in India from its very foundations.

The Revolt of 1857, an unsuccessful but heroic effort to eliminate foreign rule, had begun. The capture of Delhi and the proclamation of Bahadurshah as the Emperor of Hindustan are a positive meaning to the Revolt and provided a rallying point for the rebels by recalling the past glory of the imperial city.

On May 10, 1857, soldiers at Meerut refused to touch the new Enfield rifle cartridges. The soldiers along with other groups of civilians went on a rampage shouting ‘Maro Firangi Ko’. They broke open jails, murdered European men, and women burnt their houses and marched to Delhi. The British rule in India was  strongest between 1858 and 1905.

Although the British succeeded in suppressing the 1857 Revolt, they could not stop the growth of political awareness in India. The Indian National Congress was founded in December 1885. It was the visible embodiment of the national awakening in the country. Its founder was an Englishman, Allan Octavian Hume, a retired member of the Indian Civil Service. The first President of the Congress was W.C. Banerjee.

On December 30, 1898, Lord Curzon took over as the new Viceroy of India. The partition of Bengal came into effect on October 16, 1905, through a Royal Proclamation, reducing the old province of Bengal in size by creating a new province of East Bengal, which later on became East Pakistan and present day Bangladesh.

In 1906, All India Muslim League was set up under the leader­ship of Aga Khan, Nawab Salimul­lab of Dacca and Nawab Mohsin-ul-Mulk. The League supported the partition of Bengal, opposed the Swadeshi Movement, and demanded special safeguards for its community and a separate elec­torates of Muslims. This led to communal differences between Hindus and Muslims.

The Swadeshi movement has its genesis in the anti-partition move­ment which was started to oppose the British decision to divide Bengal. With the start of the Swadeshi movement at the turn of the century, the Indian National Movement took a major leap forward.

Morley-Minto Reforms were introduced in 1909 during the period when Lord Minto was the Governor ­General of India. The reforms envisaged a separate electorate for Muslims besides other constitutional measures. The government thereby sought to create a rift within the Congress on the one hand by winning the support of the moderates, and on the other, to win the favour of Muslims against Hindus.

An important step forward in achieving Hindu-Muslim unity was the Lucknow Pact 1916. Anti­British feelings were generated among the Muslims following a war between Britain and Turkey which opened the way for Congress and Mus­lim League unity.

Dr. Annie Besant, inspired by the Irish rebellion, started a Home Rule Movement in India in September 1916. The movement spread rapidly and branches of the Rome Rule League were established all over India.

Mahatma Gandhi dominated the Indian political scene from 1918­1947. This period of the Indian National Congress is also referred to as the Gandhian Era. It was the most intense and eventful phase of India’s freedom struggle. Mahatma Gandhi provided the leadership of the highest order and his philosophy of non-violent Satyagraha became the most potent weapon to drive out .the British from the Indian soil.

The Caliph, Sultan of Turkey, was looked upon by the Muslims as their religious head. During the First World War, when the safety and the welfare of Turkey were threatened by the British thereby weakening the Caliph’s position, Indian Muslims adopted an aggressive anti-British attitude.

The First World War, repression of freedom fighters had continued. The revolutionaries had been hunted down, hanged or im­prisoned. The Government now decided to arm itself with more powers in order to suppress the freedom fighters. In March 1919, it passed the Rowlatt Act. This Act authorised the government to detain any person without trial. The Rowlatt Act came like a sudden blow. The Indians had been promised an extension of democracy during the war.

The Government was bent on suppressing the mass agitation. In Bombay; Ahmedabad, Calcutta, Delhi and at other places demonstrators were lathi-charged and fired upon. An unarmed but a large crowd had gathered in Jallianwalla Bagh, Amritsar (Punjab) on April 13, 1919, for a meeting. General Dyer ordered his troops to open fire on them without warning. This massacre of unarmed people (hundreds died and thousands were wounded) in an enclosed place from which there was no exit, was fol­lowed by a reign of terror in several districts under martial law.

Gandhiji’s decision to call off the agitation caused frustration among masses. His decision came in for severe criticism from his colleagues like Motilal Nehru, C.R. Das, and N.C. Kelkar, who organized the Swaraj Party. The foundations of the ‘Swaraj Party’ were laid on January 1, 1923, as the ‘Congress ­Khilafat-Swarajya Party’.

Under the 1919 Act, a statutory commission was to be appointed by the British Government at the end of ten years from the passing of the Act to inquire into the working of the system of government in the country and to recommend further reforms. Thus, the commission was scheduled to be appointed in 1929. It was ac­tually appointed two years earlier in 1927. The commission consisted of seven members of the British Parliament. It was headed by Sir John Simon.

Also called the ‘Salt Satyagraha’. To achieve the goal of complete independence, Gandhiji launched another civil disobedience movement. Along with 79 followers, Gandhiji started his famous march from Sabarmati Ashram on March 20,1930, for the small village Dandi to break the Salt Law.

On August 8, 1942, the Congress in its meeting at Bombay passed a resolution known as ‘Quit India‘ resolution, whereby Gandhiji asked the British to quit India and gave a call for ‘Do or die’ to his countrymen. On August 9, 1942, Gandhiji was arrested but the other leaders continued the revolutionary struggle.

The struggle for freedom entered a decisive phase in the year 1945-46. The British Prime Minister, Lord Attlee, made a declaration on March 15, 1946, that British Cabinet Mission would visit India to make recommendations regarding constitutional reforms to be introduced in India.

On September 2, 1946, an inter­im government was formed. Congress members led by Pandit Jawaharlal Nehru joined it but the Muslim League did not as it withdrew its earlier acceptance of the Cabinet Mission Plan.

The Constituent Assembly met on December 9, 1946, and Dr. Rajendra Prasad was elected its President. The Muslim League did not join the Assembly.

In March 1947, Lord Mountbatten replaced Lord Wavell. He announced his plan on June 3, 1947. Mountbatten’s formula was to divide India but retain maximum unity. The country would be partitioned but so would be Punjab and Bengal, so that the limited Pakistan that emerged would meet both the Congress and the League’s position to some extent.

The Bill containing the provisions of the Mountbatten Plan of June 3, 1947, was introduced in the British Parliament and passed as the Indian Independence Act, 1947. The Act laid down detailed measures for the partition of India and speedy transfer of political powers to the new government of India and Pakistan.

In accordance with the Indian Independence Act, 1947, India was partitioned on August 15, 1947, into India and Pakistan. The Act made India and Pakistan independent dominions. Bloodshed and violence marked the exodus of refugees. The state of Kashmir acceded to the Indian Union after the raiders were helped by Pakistan, in October 1947. Lord Mountbatten was appointed the Governor-General of free1ndia and M.A. Jinnah the first Governor-General of Pakistan.