During the First World War, the prices of various commodities rose, the conditions of the people worsened and the government extracted many dues from the people in the name of war efforts. This gave rise to resentment among the Indian people and there were several agitations against the government. To contain this, the government passed the Rowlatt Act in 1919 which authorized the government to arrest any person without warrant and to detain him/her without trial for two years. 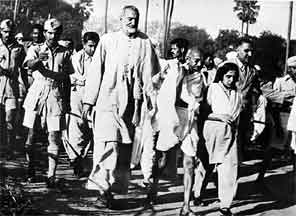 There were massive protests and demonstrations by the Indian people against this measure of the government. Gandhi also took very active part in this. He started a Satyagraha Sabha which campaigned against this act asking people to disobey it and court arrest. He also gave a call for country-wide hartal which was observed in various places on different dates. But it was generally a success. The government responded with depression.

In Punjab, this repression took its worst form and in the Jallianwala Bagh the military under General Dyer shot at unarmed people without warning. Hundreds of persons – men, women, and children – died. This Jallianwala Bagh massacre and the subsequent imposition of martial law in Punjab horrified the whole country and generated anger against the British rule.

Around the same time, the Indian Muslims were aroused because the Sultan of Turkey was deposed by the British. The Indian Muslim regarded the Turkish Sultan as their Khalifa and they started Khilafat movement for the restoration of Khalifa in Turkey. Mohammed Ali and Shaukat Ali were the leaders of the movement. They called upon Gandhi to guide them. Although Khilafat movement was not directly concerned with Indian politics, Gandhi thought that in this there was an opportunity to unite the Hindu and Muslims again the British. He, therefore, openly supported the movement.

Gandhi had decided to simultaneously, launch the non-cooperation movement at an all-India level. In September 1920, in a special session of the All India Congress Committee held in Calcutta, it was decided to launch the movement. The Nagpur Congress held in December 1920 further approved it. The Indian people were asked to boycott foreign goods and adopt Swadeshi to boycott government schools, colleges and courts, and councils, to adopt national schools, arbitration courts, and Khadi. The programme also included resignation from government services, non-payment of taxes, removal of untouchability and promotion of Hindu-Muslim unity.

The movement started at an unprecedented level. Thousands of students left schools and colleges, hundreds of lawyers and many government servants left their jobs, most of the people refused to vote in the election to the legislatures, the boycott of foreign cloth assumed massive proportion, thousands were involved in the picketing of the shops selling foreign cloth and liquor and in many places, peasants and workers were also involved along with students, middle classes, and women. Its influence was even more far-reaching. Millions of peasants and urban poor became familiar with the ideology of nationalism. Most section of the Indian population became politicized and women were drawn to movement. An anti-imperialist feeling spread to wide areas of the country and the movement imbued the Indian people with self-confidence and self-esteem.

Such a big movement, however, did sometimes reached beyond Gandhian tenet of non-violence. On 5th February 1922, in Chauri-Chaura, a crowd of peasants burnt the police station killing 22 policemen in retaliation to the police firing. Gandhi condemned this incident and withdrew the movement. This decision shocked many Congress people but Gandhi remained adamant and started a five-day fast in penance. This way non-cooperation movement came to an end.

India’s Freedom Struggle On a Timeline