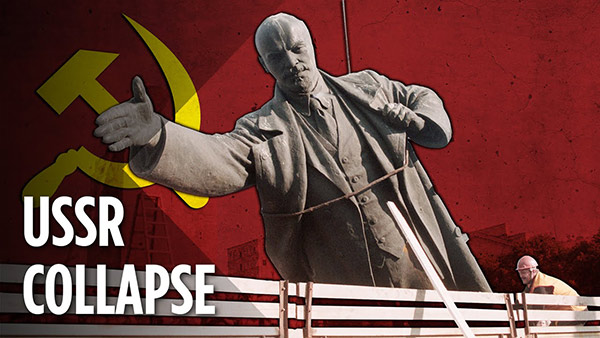 The Union of Soviet Socialist Republics (USSR) formally ceased to exist on 26 December 1991 by the declaration of the Soviet of the Republics of the Supreme Soviet of the Soviet Union. On the previous day, 25 December 1991, Soviet President Mikhail Gorbachev had resigned, declaring his office extinct, and handed over the Soviet nuclear missile launching codes to Russian President Boris Yeltsin. That evening the Soviet flag was lowered from the Kremlin and replaced with the Russian tricolour.

Representatives from 11 Soviet republics (Ukraine, the Russian Federation, Belarus, Armenia, Azerbaijan, Kazakhstan, Kyrgyzstan, Moldova, Turkmenistan, Tajikistan, and Uzbekistan) met in the Kazakh city of Alma-Ata and announced that they would no longer be part of the Soviet Union. Instead, they declared they would establish a Commonwealth of Independent States (CIS).

The Soviet state was born in 1917. That year, the revolutionary Bolsheviks overthrew the Russian czar and established a socialist state in the territory that had once belonged to the Russian empire. In 1922, Russia proper joined its far-flung republics in the Union of Soviet Socialist Republics. The first leader of this Soviet state was the Marxist revolutionary Vladimir Lenin.

Gorbachev introduced a wide-ranging program of reform. His major reforms were glasnost, perestroika, and democratization. These reforms allowed the problems of the USSR to be uncovered and become public knowledge.

With the new found freedom of Gorbachev’s reforms, some outlying Soviet states began to rebel. The first states to demand their freedom were the Baltic states of Estonia, Lithuania, and Latvia.

On 24 August, President Gorbachev resigned as general secretary of the CPSU and ordered all party units in the government dissolved. Five days later, Communist rule in the Soviet Union effectively ended when the Supreme Soviet indefinitely suspended all CPSU activities on Soviet territory.

In early December, the Republic of Belarus, the Russian Federation, and Ukraine broke away from the USSR and created the Commonwealth of Independent States. Weeks later, they were followed by eight of the nine remaining republics. At last, the mighty Soviet Union had fallen.

Who is Who Important Persons in History of World