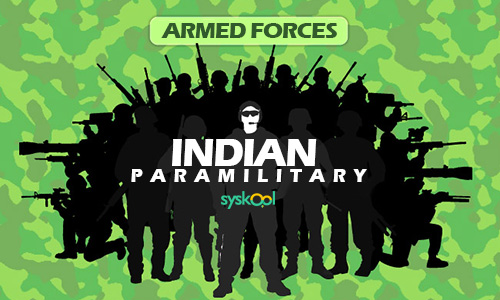 BSF is a border patrol agency of Indian Government. It is the only paramilitary force which has its own air wing, water wing, and artillery regiments which extend support to the general duty battalions in their operations during peace/war.

This Indian paramilitary force conceived on October 24, 1962, for security along the Indo-Tibet border. It was established on December 1, 1965. It is one of the Central Armed Police forces. The border with Tibet autonomous region of China, border covering 2115 kilometers. The border posts manned by ITBP are exposed to high-velocity storms, snow blizzards, avalanches, and landslides, besides the hazards of high altitude and extreme cold, where the temperature dips up to – 40 degree Celsius.

Assam Rifles are one of the paramilitary forces of India. The unit can trace its lineage back to the paramilitary police force that was formed under British in 1835 called Cackar levy. The name Assam Rifles was adopted in 1917. In times of war, they can also be used as a combat force to secure rear areas if needed.

Like all other Central Armed Police Forces, CRPF is a paramilitary security agency functioning under the aegis of Ministry of Home Affairs (MHA), Govt of India. CRPF’s primary role lies in assisting the state/union territory in police operations to maintain law and order and contain the insurgency. It came into existence as the crown representative’s police on 27th July 1936. After Indian independence, it became the Central Reserve Police Force on enactment of CRPF act on 28th December 1949.

NSG is a special response unit in India that has primarily being utilized or counter terrorism activities. It was created by Cabinet Secretariat under the National Security Guard Act of Indian Parliament in 1986. The NSG has a total personnel strength of about 14,500.

Established in its present form on 15th June 1983. CISF is another paramilitary security force in India. It was setup by an Act of parliament on 10th March 1969 with the strength of 2800. CISF was subsequently made an armed force of the Union of India by another Act of Parliament passed on 15th June 1983. Its current strength is about 145,000. CISF is the largest industrial security force in the World. It is directly under the Central Ministry of Home Affairs and its Head Quarters are in New Delhi. The CIS provides Security cover to 308 industrial units located all over India.

You may also like: Fighter Planes of Indian Air Force

Indian Home Guard is an Indian paramilitary force which is tasked as an auxiliary to the Indian Police. The Home Guards Organisation was reorganized in India in 1962 after the Sino-Indian war with the People’s Republic of China, though it existed in smaller unit individually in some places.

SSB is one the India’s paramilitary forces and is currently under the administrative control of Ministry of Home Affairs, GoI. SSB was set up in early 1963 in the wake of the Sino-Indian war. It was formerly known as the Special Service Bureau.

It is a counter-insurgency force in India. It is a paramilitary force deployed in Jammu and Kashmir.

The Rapid Action Force is a specialized wing of CRPF established on 11th December 1991 and became fully operational in October 1992. It was constituted to deal with riots and strife. Currently, it has 10 battalions.

The force has made its impact against troublemakers and rejuvenated the confidence in people.