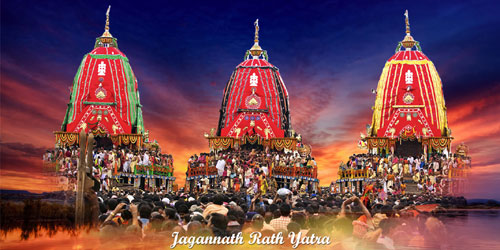 Puri has a great influence in Indian history since the ancient ages. Ratha yatra in Puri is often considered as the grandest festival of the earth. So if you start talking about the history of this town it would take you a long back in the past. Puri is considered as the southernmost district of Odisha. It is stretched over an area of around 4,022 square kilometers and contained with the population of around 1,698,730 people according to the census report of 2011. The whole civilization of this town was built up at the shore of the Bay of Bengal.

It is noted in the ancient history of India that Guru Shankaracharya had chosen this town of Puri is one of the most important place amongst the four abode of the Hindus (popularly known as the ‘chaar dhaam’ in the Hindu religious conscience. Except Puri the other three abodes are Badrinath, Dwarka, and Rameswaram) in India. This town has gained its popularity during the period of King Indradyumna who built the main Jagannath Temple at Puri and installed the deities of Lord Jagannath, his brother Balaram and sister Subhadra inside it. Puri Ratha-yatra is the festival of the chariot of Lord Jagannath and it is celebrated every year in Puri between the months of ‘Ashadha’ in the Hindu calendar which comes between the months of June and July in Gregorian calendar when the monsoon prevails in the state.

Rituals of the Festival:

During this festival, the wooden idols of the Lord Jagannath, Lord Balabhadra (The other name of the elder brother of Lord Krishna who is mostly known as ‘Balaram’) and Goddess Subhadra are taken out from the main temple constabulary and establish on the respective chariot. The celestial wheel of Lord Krishna which is actually known by the name ‘Sudarshana Chakra’ is also taken out on the chariot. The chariots are huge in size and designed by the thousands of devotees. It is decorated so colorfully and flourished with every material which is preferred by the deities. The works of the installations and design is done by the local people and the devotees from every corner of the globe on the ‘Bada Danda’ which comes in the grand avenue road near ‘Gundicha Temple’. After starting the procession from the main temple the chariot is dragged forward towards the ‘Gundicha Temple’. The ‘Gundicha Temple’ is also considered as the ‘mamar baari’ (uncle’s house) of Lord Jagannath. It is around two miles away at the northern part from where it is started. The main Chariot in this festival made for Lord Jagannath is 14 meters of a height and covered 10 meters of an area. This chariot is stood on total 16 wheels. The chariot is made of more than 700 trees contributing around 400 cubic meters of wood. These woods are brought from the local forest areas located along the river Mahanadi bank. The classical form of wood cutting is used when the trees are cut from the forest. The actual construction of this chariot begins two months before the festival day Ratha-yatra in Puri started. The chariots of the Goddess Subhadra and Lord Balabhadra are reached directly the ‘Gundicha temple’ but the chariot of Lord Jagannath used to be stopped at his aunt’s (maa sima) house at the Goddess ‘Ardhamshini Temple’. Devotees offer their Lord Jagannath with the ‘Poda Pitha’ (a locally made cheese cake) at this temple and there after the journey is started again and headed to the destination ‘Gundicha Temple’. Here he stays for seven days and after that Lord Jagannath is returned back to the abode of the main temple along with Balabhadra and Subhadra where they were before. While staying at the ‘Gundicha Temple’ the triad goes through the same rituals which are usually observed at the main temple of Jagannath.

Chastity of the Festival:

Ratha yatra in Puri is often considered as the grandest festival of the earth. More than million people are counted here during this festival that comes from different parts of the country and even from outside of India. The whole festival is full of spectacles, color, drama, togetherness and it is in a huge manner. This Puri Ratha yatra festival is believed to be initiated in the period of Svarachisha Manu of the second Manvantara. There is also a legend which tells us that it was continued until the Lord Brahma’s second life had ended. There is a mention of Lord Jagannath and this temple in the great epic ‘Ramayana’ also which was written by Rishi Valmiki. According to that when Lord Rama was preparing to leave the earth he asked Bibhishana (Bibhishana was the younger brother of Ravana) to start worshiping of Lord Jagannath in his absence. Actually, both Lord Rama and Lord Jagannath (who is believed to be the merciful aspect of Lord Krishna) are considered as the avatar of Lord Vishnu, one of the triad referred as the Trikal. The festival of Ratha yatra in Puri celebrated in the present time is derived from the ‘Skanda Purana’ which had fixed the date of this festival to the devotees on the second day of the bright full moon in the month of Asadha in the Hindu calendar. The month of ‘Asadha’ comes between the months of June and July according to the Gregorian calendar. This full moon day of the ‘Asadha’ is referred as the ‘Pushyami Nakshatra’ by the astrologists. It is believed by the devotees that on this day Lord Jagannath flourishes this place with causeless mercy and bliss.

Don’t Miss: The Sufi Movement: Practices of various orders of Sufis in India

The festival of Ratha yatra in Puri is also known as the ‘Gundicha Yatra’ as on this day Lord Jagannath moves to the ‘Gundicha Temple’ along with his elder brother Balaram and younger sister Subhadra. But not only ‘Gundicha Yatra’, the festival of Ratha yatra in Puri is also known as ‘Ghosha Yatra’, ‘Navadina Yatra’, ‘Dasvatara Yatra’ and various other names by the local inhabitants of Odisha. For the believers and the devotees of Lord Jagannath, the Ratha-yatra in Puri is considered as the most auspicious festival. A Sanskrit sloke (verse) is there to define the auspiciousness of this festival and that is “Rathe tu vamanam / Drishtwa punarjanam / Na vidyate…” the meaning of this verse refers to a single glimpse of the Vamana (the dwarf form of the lord which is an incarnation of Lord Jagannath) on a rath (chariot) can late you free from the unbearable cycle of birth and rebirth. The Yatra (the rituals of the journey) on the festival day actually takes two forms. The first one is a shorter part which completes a full circle of the main temple with the deities and the other one is the longer one. In this part, the deities are taken to the other destination which is the ‘Gundicha Temple’. The ‘Ratha Yatra’ is an important part of this whole festivals and it is observed in the most flawless manner. The multiple ropes of the chariots are dragged by millions of the devotees who come to attend this festival. It is believed that if someone touches the rope and pull it or even get a glimpse of the deities will earn heavenly virtues. There is also a small but horrifying anecdote from the past about this festival which tells that many devotees used to throw themselves under the wheels of the chariot during the ‘yatra’, believing that they would get heaven if crushed to death by the chariot wheels. Time has changed and these things have been reduced due to the tight security system of the state administration but as far as the devotion and popularity of Puri Ratha yatra are is concerned seems not been reduced a single inch till today.