My account
Get into your account.
LoginRegister
Plans
Home Learn History The Revolt 1857: the First War of Independence 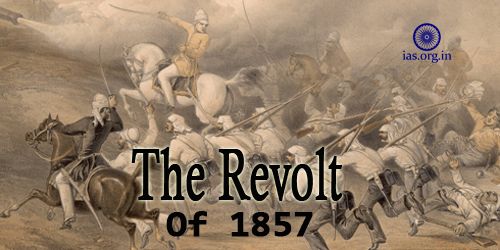 On the graph of popularity, The Revolt of 1857 stands at the top because a vast variety of people from almost all classes within the nation (of course in the making- perhaps a process still going on) find some elements to emphasize with. This Revolt, by its sheer nature and density, has acquired its place in people’s history that represents the rational analysis of the storehouse of memory. People’s history includes in itself the history of an elite as well as folk, constructing a record of events that is handed over from one generation to another.

The Revolt 1857, the first major challenge to the might of the British power, did not begin abruptly. The sense of dissension among sepoys and to some extend among general people against designs of their colonial masters was taking root much before the real Revolt had broken out. The immediate cause of the Revolt was officially made public by a proclamation issued at Delhi by the band of sepoys from Meerut who reached Delhi on 11 May 1857 and appealed Bahadur Shah II to become their leader. These sepoys had, just the previous day (10 May 1857) defied and killed the European officers, and marched straight away to Delhi – the symbol of power. The proclamation issued by them read: “it is well known that in these days all the English have entertained the evil designs-first, to destroy the religion of the whole Hindustani Army and then to make the people by compulsion Christians. Therefore, we solely on account of our religion, have combined with the people, and have not spared alive one infidel, and have re-established the Delhi dynasty on these terms.”

Although the Revolt stated with the Bengal Army Sepoys and the unhappiness of the sepoys first came to the fore in 1824 when the sepoys of 47th regiment was ordered to go to Burma because to the religious Hindu, crossing the sea meant forfeiture of caste, the section of general population also revolted in towns and villages which were near the cantonments which were strewed from Bengal to the North West Frontier, Rajasthan, and Central India.

These uprisings intensified into terse mass wars of national freedom in 1857-58, particularly in the kingdom of Awadh which had been, in the recent past, annexed by the officers of the East India Company, and also in some areas like Jhansi and Bhojpur.

The Revolt at Meerut and the proclamation of Bahadur Shah II as the Shahenshah-e-Hindustan proved to be the precursor to a widespread rebellion almost all over North India as well as Central and Western India.

Within a month of the event of the capture of Delhi the Revolt expanded to different parts of the country; the major centres of the rebellion were: Kanpur, Lucknow, Allahabad, Benaras, Bareilly, Jagdishpur, and Jhansi.

The view that the Revolt of 1857 represents an entire range of legends in Indian national subconsciousness takes strength from the fact that the revolt was explicitly recorded. Authenticating the view K.M. Pannikar and Bipin Chandra pen down (in their Book: India’s Struggle for Independence), “The rebel activity was marked by intense anti-British feelings, and the administration was invariably toppled.”

The rebels as they did not have leaders, turned to the territorial aristocrats and feudal chiefs who had bitter experience of suffering at the hands of the British because, according to the understanding of the rebel sepoys, they were the traditional leaders of Indian society.

At Kanpur, Nana Saheb became the natural choice to lead the rebellion-Adopted son of the last Peshwa Baji Rao II, Nana Saheb, after refusing the family title and abandoning Poona, was living near Kanpur.

At Lucknow Begam Hazrat Mahal took over the reign as in Lucknow popular sympathy was immensely in favour of the deposed Nawab. A regular administration was organized in which important offices were shared equally by Hindus and Muslims.

Must Read: Impact of Religious Policy of Aurangzeb on Mughal Empire

At Bareilly, Khan Bahadur was chosen to take command. Khan Bahadur, though in the beginning was reluctant to take this responsibility, took the charge of administration, once the Revolt broke up and spread, and organized an army of 40,000 soldiers and gave a tough fight to the British.

It was Kanwar Singh, the zamindar of Jagdishpur, at the age of 70 who took the charge of leading the Revolt in Bihar. He had a personal grudge against the British because they had deprived him of his estates.

Jhansi’s Rani Lakshmibai, the most outstanding leader of the Revolt and who took the leadership of sepoys, also had the personal grudge against the British as they had declined to allow her adopted son to succeed to the throne after the demise of her husband and annexed her state by using the Doctrine of Lapse. The emerged as one of the most formidable enemies the British had to confront.

All these events created enemies for Lord Dalhousie’s successor Lord Canning. The policies, which the British implemented, of modernization and progress at the cost of tradition created the fuel that was ignited by the cartridge controversy. The slogan emerged “customs and religion in danger”. Muslims and Hindus both felt threatened and endangered. Working people such as Muslim artisans and weavers, Hindu archers, popularly known as Pasis, who were traditionally village guards also participated, must more actively than it could have been anticipated at that time, in the Revolt, giving the Revolt a pan-Indian Character in which, in fact, all listened to the call of dharma of deen.

In the sense of bringing the immediate result of obtaining liberation from the British the Revolt, of course, failed. However, the Revolt boosted the confidence of India as a whole in the sense that they had realized their power to resist and fight for the greater cause.

It can be easily come to the conclusion that the Indian side cracked into countless fractured interests as the Indian aspect of the Revolt showed the lack of unity whereas colonialism presented a United front.

Significance of the Revolt of 1857

The real significance of the Revolt lies in highlighting ways in which colonialism had contracted different Indian regions since the battle of Plessey. The Revolt extended the heritage of resistance to British arrogance that was demonstrated by the Sikh Khalsa and Talpur Mirs of Sindh in the 1840s, by the Afghans, the Burmese, and the Marathas in the previous 50 years, and by Tipu Sultan and Hyder Ali in Mysore and the Policers in further South.