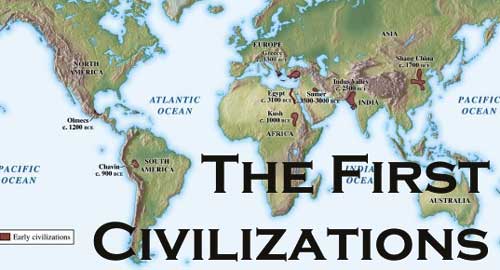 First to mention among earliest civilizations, over 5000 years ago the fertile valley of the river Nile, in Egypt, was the home of a thriving civilization which lasted for about 3000 years. The people were ruled by kings who were called the ‘Pharaohs’.

Most of the people were farmers who worked for rich land owners or the king. Besides farming, the Egyptians used boats made from papyrus reeds to fish in the Nile River with the help of nets and hooks. Egypt was divided into two kingdoms called the upper and lower kingdoms.

The Egyptians worshipped a large number of gods and they believed in life after death. This was reason why their Pharaohs were embalmed after death of placed in the burial chambers inside pyramids with the entire thing that they might need in the next world.

Some of the discoveries and contributions of this civilization include the discovery of paper, the art of picture writing called Hieroglyphics, the science of embalming etc. The civilization fell when the Romans conquered it in 30 BC.

Before 200 BCE the lower part of Mesopotamia, in modern Iraq, was inhabited by the Sumerians. The Sumerians came to this area probably from modern day Turkey or Iran. Sumerians considered their rulers to be representatives of god.

The cities of Uruk, Ur and Eridu were built by them using clay bricks dried in the sun, a large number of clay tablets with writings, found in the ruins of their cities; prove that the Sumerians know how to write using sounds. This was a significant development over the picture writing developed by the Egyptians.

Though the plains in this area were fertile, they were devoid of water; farmers dug ditches and canals to bring water to their lands from rivers. Sumerians were fine crafts men and many of their works of art have been discovered by archaeologists.

One of the earliest civilizations of the world developed on the bank of the river Indus between 2500 BCE and 1500 BCE in modern day Pakistan. There were more than hundred small towns and villages in the area along river Indus. Amongst these Mohenjo-Daro and Harappa are famous ones.

The People who inhabited this area used baked clay bricks to build their homes and surroundings streets. The remains of the city of Mohenjo-Daro show that there was a granary for storing grain, temples and a large public bath with a proper drainage system and a large number of well build houses.

Copper and bronze was used by the people to make various things they had a system of measure and weight though most of the population was involved in farming, some of inhabitants of this area were traders and traded with the Babylonians.

The reason for the downfall of this one among earliest civilizations is not known though it is assumed it might have happened due to floods in the river Indus.

Along the coast of the Mediterranean was located large number of cities inhabited by the Phoenicians. These people were skilled ship builders and traders. Their ships had sails and rudder and were rowed by a large group of men. All the cities of this area were linked by sea. The Phoenicians traded in many things amongst with the most famous ones were ivory, cloth, jewellery, glass, dyes, etc.

Most of their trading was done through the port of Carthage while they also spread into Rhodes, Cyprus, Malta, Sicily, Sardinia, etc. The Phoenicians sailed to the trading ports in ships and displayed and sold their wares on the beaches. Phoenicia was over the years, conquered by the Persians, Assyrians and Babylonians but trading continued till the Greeks came to this area which led to the downfall of the Phoenicians.